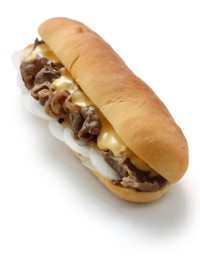 A Philadelphia deli believes its cheesesteak is special, and the proof is in the apostrophe.

Campo’s Deli at Market has filed a lawsuit in its effort to obtain a trademark for the term “Philadelphia’s Cheesesteak,” Courthouse News Service and the TTABlog report.

The suit (PDF) says the mark is not an attempt to improperly control the generic term “Philadelphia Cheesesteak.”

“The difference in the two phrases, of course, is an (’s),” the complaint says, “which demarcates a particular kind of gloriously gluttonous sandwich provided only by the plaintiff—not just a Philadelphia Cheesesteak, but ‘Philadelphia’s Cheesesteak.’ Plaintiff’s mark is descriptive of the unique and tremendously delicious goods it offers for sale to the famished masses, and is not, by contrast, an indication of the geographic origin of the sandwich, which would otherwise prohibit registration.”

The suit also claims the owner of the registered marks is a wholesale supplier of raw meat. The deli, on the other hand, is seeking a trademark for a type of sandwich. “There is, accordingly, no likelihood of confusion,” the suit says.