Dentons launches new shared services hub in Poland, will lay off about 25 in UK 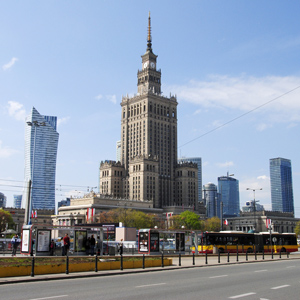 The Palace of Culture and Science in Warsaw, Poland.

Dentons will eliminate approximately 25 jobs in the United Kingdom in preparation for the opening of its new shared-services hub in Warsaw, Poland. The hub, which officially launched on Monday, will cover the United Kingdom, the Middle East and Africa and Europe.

The firm announced that its new Warsaw operation would called the Dentons Business Services EMEA, and that it would handle IT, finance, business development, human resources and marketing. In preparation for the launch, the firm had previously announced it would eliminate 50 jobs in the UK. However, according to Legal Business, the firm will keep around half of those jobs now.

“The launch of DBSE marks the beginning of our global shared services strategy—a key integration initiative that aims to improve the quality of business services provided to lawyers across the firm,” said Dentons Global Chairman Joe Andrew, in a press release. Dentons Global CEO Elliot Portnoy added, “This represents a major step forward toward achieving our goal of offering clients the highest quality of legal work better, faster and more economically than any of our competitors.”

Meanwhile, Warsaw has proven to be a popular location for large law firms looking to set up shared services hubs. In November 2015, DLA Piper opened a back office in the city to handle administrative, financial, human resources, marketing and IT tasks. In 2014, Linklaters established a low-cost center in Warsaw after taking its previously outsourced employees back under its umbrella. Linklaters then added to their Warsaw hub, increasing the office by 50 percent after moving into a larger space in October.