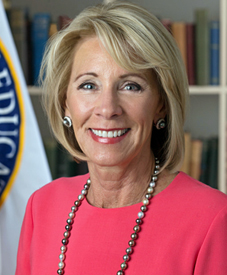 Corrected: The U.S. Department of Education on Friday announced that it will engage in rulemaking regarding schools’ Title IX responsibilities involving campus sexual misconduct complaints, and in a question-and-answer document said that there’s no longer a requirement that institutions use a preponderance of evidence standard when determining whether an assault took place.

Now, schools can use a clear and convincing evidence standard when making determinations, the Los Angeles Times reports. The document (PDF) also notes that the previous standard of a 60-day time frame for sexual assault investigations has been rescinded. “There is no fixed time frame under which a school must complete a Title IX investigation.”

Additionally, the accused will have greater access to evidence, Politico reports, and accusers’ identities must be revealed before questioning.

Those in favor of the change maintain that the 2011 “Dear Colleague” guidance from the department’s Office for Civil Rights deprived the accused of due process. The department document issued Friday states that while schools “must take steps to understand what occurred and respond appropriately,” they need to do that in “a manner that respects the legal rights of students and faculty, including those court precedents interpreting the concept of free speech.”

“This interim guidance will help schools as they work to combat sexual misconduct and will treat all students fairly. Schools must continue to confront these horrific crimes and behaviors head-on. There will be no more sweeping them under the rug. But the process also must be fair and impartial,” said U.S. Department of Education Secretary Betsy DeVos, the Detroit Free Press reports.

Earlier this month, DeVos indicated that the department’s 2011 guidance would be nixed.

“Washington has burdened schools with increasingly elaborate and confusing guidelines that even lawyers find difficult to understand and navigate. Schools have been compelled by Washington to enforce ambiguous and incredibly broad definitions of assault and harassment,” she said in a speech at George Mason University.

In June, the ABA’s Criminal Justice Section’s Task Force on College Due Process Rights and Victim Protection issued a report (PDF) advocating that both parties in campus sexual assault investigations should receive written notice before the investigation begins, and they should both be allowed to review the school’s evidence, respond to the final report, and have the right to appeal.