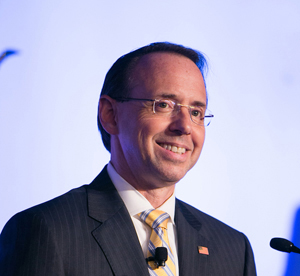 Deputy Attorney General Rod Rosenstein may not be a very popular person within certain circles in Washington, D.C., but he received a rock-star welcome during the opening forum of the ABA Annual Meeting.

Speaking Thursday to a standing room-only crowd, Rosenstein received multiple standing ovations as he talked about the importance of preserving and promoting the rule of law while defending U.S. Department of Justice policies regarding efforts to combat foreign meddling in U.S. elections and the recent zero-tolerance policy on illegal immigration.

In a short question-and-answer session with ABA President Hilarie Bass, Rosenstein affirmed that zero tolerance was consistent with the rule of law, and that the DOJ was simply doing its job in enforcing the laws and treating everyone equally.

Rosenstein also assured those in attendance that federal agencies are doing a lot to combat foreign meddling in elections and propagation of fake news. “Because a lot of the information we learn is from classified intelligence, there’s a lot we don’t talk about publicly,” said Rosenstein, who noted that federal agencies including the FBI, Justice Department and U.S. Department of Homeland Security are constantly briefing state and local election officials about cyberthreats and attacks. He also pointed out that federal agencies are taking steps to combat hacking of political campaigns and candidates and pointed to the July indictment of 12 Russian nationals by Special Counsel Robert Mueller as evidence of this commitment.

When asked about the opioid crisis and safe injection sites as a means of combating the ongoing issue, Rosenstein was dismissive. “It’s illegal; it’s a crime,” he said. “I think you can anticipate that if someone would try that in the U.S., they would face litigation by the Department of Justice and they wouldn’t have much of a defense.” Rosenstein added that while he was “100 percent committed” to prevention and treatment, he believed that these sites sent the wrong message, giving illegal and dangerous drugs the imprimatur of government approval. 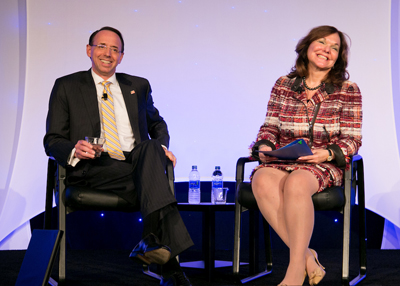 The embattled deputy attorney general has become a central figure in the ongoing probe into Russian interference during the 2016 presidential election. He was confirmed as the second-highest-ranking official at the DOJ by a 94-6 vote in the U.S. Senate in April 2017 after a 12-year tenure as U.S. attorney for the District of Maryland. Rosenstein soon found himself a fixture in the news. A couple of weeks after his confirmation, he authored a memo recommending that FBI Director James Comey be fired. Less than 10 days later, he appointed former FBI Director Robert Mueller as special counsel overseeing the Russia investigation after Attorney General Jeff Sessions recused himself.

Since then, Rosenstein has been under near-constant pressure to fire Mueller, amid reports that he could also be fired, and has become a target of House Republicans. Last week, 11 representatives filed articles of impeachment against Rosenstein accusing him of not turning over requested documents. One day later, one of the co-sponsors of the impeachment resolution, Rep. Mark Meadows (R-N.C.), announced he would table the effort and focus on pursuing a contempt citation if the documents were not produced.

Ultimately, Rosenstein defended his boss Sessions, echoing the ex-Alabama senator’s statements that the DOJ must be a nonpartisan entity dedicated to representing all Americans and not just a small subset.

“The Department of Justice must never be a partisan actor,” Rosenstein said. “In all cases, agents and prosecutors are obligated to make neutral decisions, preserve personal privacy, protect national security, and insulate investigations from political interference.”

CNN: “Deputy AG Rosenstein laughs off his critics in speech to lawyers”

Politico: “Rosenstein: ‘I think informing the American people is an important part of deterrence’”