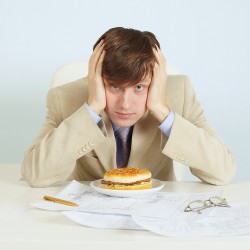 A sheriff’s deputy who claims he was served–but did not eat–a spit-laced burger can sue the burger maker under state product liability law for emotional distress, the Washington Supreme Court has held.

The court, in a 6-3 decision (PDF) Thursday, said state law permits relief for emotional distress damages, in the absence of physical injury, caused by being served a contaminated food product, if the emotional distress is a reasonable reaction, the Seattle Post-Intelligencer reports.

Clark County sheriff’s deputy Edward Bylsma had sued Burger King Corp. and a Vancouver-area franchise in 2009 after he said he was served a Whopper topped with spit by a Burger King employee with a criminal record.

Blysma didn’t eat the burger in question. After receiving his food, he lifted the top bun and saw what he described as a “slimy, clear and white phlegm glob” that was later determined to be spit on the patty.

A DNA test confirmed that the employee was the culprit. He pleaded guilty to assault and was sentenced to 90 days in jail.

Bylsma’s suit was previously dismissed by a federal court judge on the grounds that the state’s product liability law does not allow for recovery of mental distress damages caused to a purchaser by a contaminated product in the absence of physical injury.

But the San Francisco-based 9th U.S. Circuit Court of Appeals sought a clarification of the law in a certified question it presented to the state supreme court last month.

Hat tip to How Appealing