Dershowitz: Gov. Perry’s indictment is an example of 'criminalization of party differences' 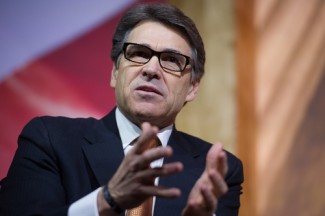 Texas Gov. Rick Perry is getting support from retired Harvard law professor Alan Dershowitz, who sees the Republican governor’s indictment as part of a dangerous trend.

Perry was charged on Friday with one count of abuse of official capacity and one count of coercion of a public servant for trying to pressure a district attorney who is a Democrat to resign by vetoing funds for her office’s public integrity unit, Texas Lawyer reports. Perry took action after the DA, Rosemary Lehmberg of Travis County, was arrested for drunken driving.

The liberal Dershowitz criticized the indictment as Perry appeared on Fox News Sunday to defend his action, the New York Times reports. “If I had to do it again, I would make exactly the same decision,” Perry said. The governor said Lehmberg’s blood alcohol level was three times the legal limit and she was “abusive” when she was arrested.

“This is not the way we settle differences—policy differences—in this country,” Perry said. “You don’t do it with indictments. We settle our differences at the ballot box.”

Dershowitz made a similar point in an interview with Newsmax. “This is another example of the criminalization of party differences,” Dershowitz said. “This idea of an indictment is an extremely dangerous trend in America, whether directed at [former House Majority Leader] Tom DeLay or [former President] Bill Clinton.”

The Times notes that Perry “has been an unrivaled power in Texas,” making thousands of appointments to state boards and commissions during his 14 years as governor. His opponents see the indictment as showcasing “the arrogant overreach of a governor with unchecked power,” the newspaper says.

Perry turned himself in to Travis County authorities on Tuesday, and pleaded not guilty to the two felony charges on Wednesday, ABC News reported.