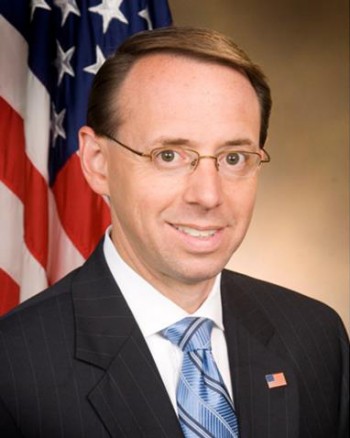 Rosenstein was approved in a 94-6 vote, reported the Washington Post and Bloomberg Politics.

Sen. Richard Blumenthal of Connecticut was among the Democrats who voted against confirmation. Blumenthal said he could not support Rosenstein because he refused to commit to hiring a special counsel to investigate Russian interference in the election, according to the Bloomberg story.

During his confirmation hearing in March, Rosenstein said he will make a decision on a special counsel after he is confirmed and briefed on the investigation. Attorney General Jeff Sessions has recused himself from any investigations regarding the presidential campaign. Sessions made the decision after revelations that he met twice last year with Russian ambassador Sergey Kislyak, but did not mention the contacts at his confirmation hearing.

In an interview before his confirmation with the Wall Street Journal (sub. req.), Rosenstein appeared skeptical of special counsel probes. Nobody thought the Whitewater probe was efficient, he said.

“For some people, there is political significance to what the chief investigator is called, but for me, the issue is how is the investigation being conducted,” he said.

Lawyers who have worked with Rosenstein told the National Law Journal (sub. req.) that he values efficiency and detail-oriented work, and listens to opposing views. They described his leadership style as no-nonsense and his demeanor as collegial. He steers clear of politics. In interviews with the Wall Street Journal, more than one of Rosenstein’s colleagues described him as a Boy Scout.

As U.S. attorney, Rosenstein was known for his pursuit of public corruption cases and his fight against gang violence, according to the NLJ. He also pledged vigorous enforcement of antitrust laws during his confirmation hearing.

Rosenstein’s entire career has been spent in public service. He graduated from Harvard Law School in 1989, clerked for a federal prosecutor and federal appeals judge, and then joined the U.S. Attorney General’s office. Before becoming U.S. attorney for Maryland in 2005, his positions included counsel to the deputy attorney general and assistant U.S. attorney.