Whittier Law to close; profs fighting to keep it open 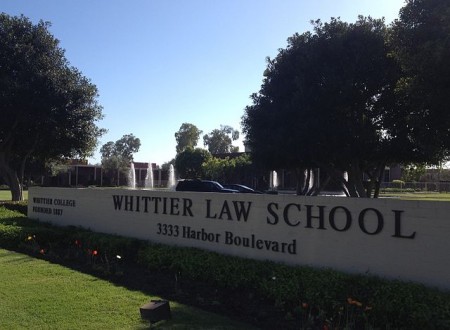 Whittier Law School will close, it was announced Wednesday, and a group of law professors there have filed a temporary restraining order motion asking the Los Angeles County Superior Court to halt the decision.

While many law schools are struggling with enrollment and tuition declines, Whittier is the first one with ABA accreditation to shut down, the New York Times’ DealBook reports. No closure date has been set, but the law school will not be enrolling first-year students for the fall of 2017.

According to the law professors’ motion (PDF), which was noted at TaxProf Blog on Thursday, Whittier College’s board of trustees voted April 13 to shut down the law school. The filing claims that the law school “has almost never suffered an operating loss,” and notes that the college sold the law school campus in January for $13 million.

Law professors were told that the real estate sale money would be reinvested in the law school, the filing states. It also states that a buyout program was offered to faculty in 2015, and at the time the college assured faculty that it wanted long-term sustainability for the law school.

Around that time, the law school was told to decrease admissions, and some professors thought that the directive could have been to increase the law school’s quality, says Rachana Pathak. One of the plaintiffs, she serves as the law school’s associate dean for student and alumni engagement, and directs its Institute for Trial and Appellate Practice.

“Now we think it was because they were setting us up for this closure decision,” she told the ABA Journal.

A 2016 task force comprised of Whittier law school and college faculty recommended against discontinuing the law school, for educational reasons. According to the court motion, the committee found the law school’s prospects for improvement to be “very favorable.”

Judith Daar, Whittier Law’s interim dean, told the ABA Journal that the school has not been found to be out of compliance with ABA Standards.

“One of the many devastating aspects of the Whittier College Board of Trustees’ decision was their seeming unwillingness to recognize and consider the enormous and innovative programming we have recently put in place to improve our students’ outcomes on the bar exam,” she wrote in an email to the ABA Journal. “Our top-notch bar preparation faculty has been working with our energized and committed student body to tackle the notoriously difficult California bar exam. We continue to take pride in our current students and thousands of alums whose careers have advanced justice and enterprise worldwide.”

Under Rule 34 of the ABA Standards and Rules of Procedure for Approval of Law Schools, law schools that decide to close must “promptly announce” the decision to the ABA’s Section of Legal Education and Admissions to the Bar, as well as other relevant regulators, says Barry Currier, its managing director.

“I have just seen the board’s announcement. We look forward to the college formally communicating that decision to our office in the very near future. From there, we will follow the requirements of Rule 34, working with the school and other regulatory bodies, as appropriate,” he said in a statement.

Relief sought in the law professors’ motion include restraining the college from taking steps to close the law school, including not announcing that it will close to current students, prospective students and members of the media.

“We’re not giving up. We want to use the lawsuit to effect positive change,” Pathak says. “The board is telling the public that they’re deeply concerned about the educational outcomes of the law school, and the 23 percent pass rate is an easy soundbite to point to.”

She admits that the percentage is disappointing, but claims that Whittier students eventually pass a bar exam “at high rates.”