Detroit files for bankruptcy, the biggest US city ever to do so 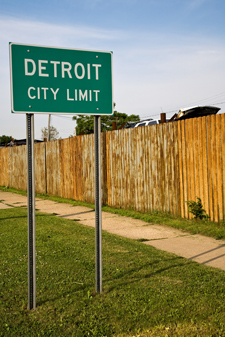 The city of Detroit filed for bankruptcy on Thursday afternoon, the largest U.S. city ever to do so.

Beset for decades by population and revenue loss, as well as government mismanagement, the city is seeking Chapter 9 protection as it renegotiates $18.5 billion in debt, reports the Detroit Free Press.

“The fiscal realities confronting Detroit have been ignored for too long. I’m making this tough decision so the people of Detroit will have the basic services they deserve and so we can start to put Detroit on a solid financial footing that will allow it to grow and prosper in the future,” said Gov. Rick Snyder. “This is a difficult step, but the only viable option to address a problem that has been six decades in the making.”

Meanwhile, two pension funds have already sued seeking to block the bankruptcy from proceeding, according to Bloomberg.

Filed Tuesday in Michigan state court in Ingham County, their suit asks for a court ruling that allowing the bankruptcy to go forward would interfere with state constitutional protection of public retiree rights. It names the emergency manager for the city of Detroit and the governor as defendants.

In a letter attached to the Thursday bankruptcy filing, Snyder said he had approved the Chapter 9 filing by the city manager because “it is clear that the financial emergency in Detroit cannot be successfully addressed outside of such a filing, and it is the only reasonable alternative that is available,” reports Reuters.

The emergency manager, Kevyn Orr, had been trying to negotiate with creditors to approve a workout plan prior to the filing.

The Free Press provides a link to the complaint (PDF).