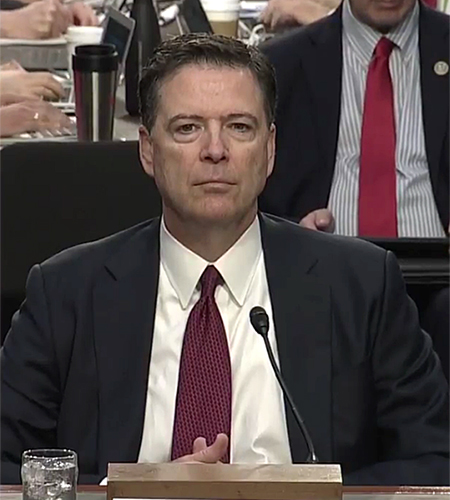 President Donald Trump’s personal lawyer is targeting fired FBI director James Comey over his revelation on Thursday that he gave a memo summarizing a meeting with the president to a friend so he could give it the press.

Trump lawyer Marc Kasowitz will reportedly file a complaint over the leaked memo, report NBC News, CNN, Fox News and Reuters. The stories are based on an anonymous source. According to Reuters, Kasowitz will file a complaint with the Justice Department’s inspector general and will make a “submission” to the Senate Judiciary and Senate Intelligence committees.

But the memo leak does not appear to be illegal or to violate executive privilege, according to University of Texas law professor Steve Vladeck in a Washington Post article. Other experts interviewed by the Los Angeles Times and ABC News agree with that view.

CNN also points out that the Justice Department has limited jurisdiction over former employees. If the department finds wrongdoing it can make a note in Comey’s file to be used if he seeks employment there in the future.

Comey told the Senate Intelligence Committee that he gave a memo summarizing one of his meetings with Trump to a law professor and asked him to give it to a reporter. Comey said he wanted the memo released “because I thought that might prompt the appointment of a special counsel.”

Comey leaked the memo after his May 9 firing and after a Trump tweet three days later that read, “James Comey better hope that there are no ‘tapes’ of our conversations before he starts leaking to the press!” Comey said the tweet led him to believe he needed to get the information out in the “public square.”

A story later appeared in the New York Times, based on a Comey memo, about Trump allegedly telling Comey he hoped he could let go of the investigation into former national security adviser Michael Flynn’s contacts with Russian officials.

Kasowitz said in a statement released after Comey’s testimony that Comey had “unilaterally and surreptitiously made unauthorized disclosures to the press of privileged communications with the president.” Kasowitz said the New York Times had been quoting from Comey’s memos while he was still FBI director. He also said that Comey admitted giving to his friends the memos of conversations, one of which was classified.

But Comey said he gave one memo to the law professor—apparently the one about the Flynn conversation—and he was careful not to put any classified information into the memo, Slate points out.

“I remember thinking, ‘This is a very disturbing development,’” Comey had testified. “If I write it in such a way that I don’t include anything that would trigger classification, that would make it easier for us to discuss within the FBI and the government and to hold on to it in a way that makes it accessible to us.”

In his Washington Post piece, Vladeck says Comey’s memo isn’t covered by executive privilege and, even if it were, disclosing it without authorization isn’t illegal.

Executive privilege serves to protect against compelled disclosure of confidential executive branch communications, and it is meant to shield against a court order or congressional subpoena, he says.

The privilege “is not a sword, though,” Vladeck writes. “So where a current or former government employee wants to cooperate and turn over the requested information, the privilege itself won’t—and can’t—stop him or her.”

And voluntary disclosure is not illegal, Vladeck says. Federal law bars unauthorized disclosure relating to national defense or that has pecuniary value to the United States, and neither applies when information in the memo is unclassified.

Vladeck adds that Trump “has almost certainly waived any potential privilege claim” by acknowledging the existence and substance of the discussions. And if the privilege weren’t waived, any interest in confidentiality can be outweighed by the value of disclosure when it has some bearing on criminal cases.

And that means Trump likely could not successfully claim executive privilege to avoid releasing tapes of the conversations, if he has any, Vladeck says.

Though Comey’s disclosure of unclassified information isn’t illegal, that doesn’t mean it is appropriate, Vladeck says.

“Not for the first time, it appears that Comey took it upon himself to breach important norms governing the conduct of senior law enforcement officials—an offense that, perhaps ironically, would have unquestionably justified his termination, if he hadn’t already been fired before doing it,” he writes.