Did David Boies push ethical boundaries with dual role for Weinstein and the New York Times? 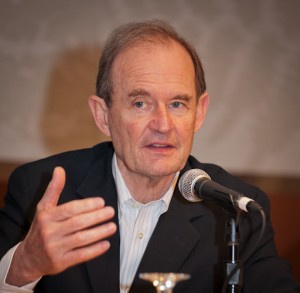 Boies Schiller Flexner partner David Boies says he would never have signed a contract with an investigative agency had he known of the tactics it used in an effort to stop the New York Times and other journalists from publishing a story about sexual harassment by embattled Hollywood producer Harvey Weinstein.

But ethics experts are raising questions about Boies’ decision to sign the contract even as his law firm represented the newspaper in unrelated matters, report the New York Times, Slate, NBC and the Atlantic. Another issue, the experts say, is whether Boies should have known of the agency’s conduct so he could take remedial action to stop its questionable behavior.

The Times has ended its relationship with Boies Schiller and says it considers the dual roles to be “intolerable conduct, a grave betrayal of trust, and a breach of the basic professional standards that all lawyers are required to observe.”

Boies appears to be arguing that he believed the contract was simply for fact gathering, according to Cardozo emeritus law professor Lester Brickman, who spoke with NBC. Boies’ apparent argument, Brickman said, is he didn’t take a position adverse to the Times because the contract wasn’t intended to inhibit the paper from publishing the truth.

Brickman sees a bigger issue. “How much loyalty do you owe a client when you take on another client?” he said.

Boies’ role came to light in a New Yorker story about the work of the agency, Black Cube, which is largely run by former Israeli spies. The Black Cube contract states that a primary objective is to aid efforts “to completely stop publication of a new negative article in a leading NY newspaper.”

A Black Cube investigator posed as other people to try to obtain information from journalists about women making allegations about Weinstein and to befriend an actress who later went public with a rape allegation against Weinstein.

Boies says he didn’t draft the contract, though he signed it. Weinstein had hired other lawyers who wrote the contract and hired Black Cube after Boies told him he couldn’t represent him in regards to a rape allegation, Boies says. And Boies also tells the Times he got involved with the contract only because of a billing dispute with Black Cube nor did he direct the investigative agency’s work.

Boies added that he believed Black Cube would be used to find out whether there was evidence that would convince the Times it shouldn’t publish the article, and he doesn’t believe that to be adverse to the Times’ interest.

Boies also says his engagement letter with the Times made clear the firm could represent clients adverse to the Times on matters unrelated to the work the firm was doing for the newspaper.

Slate identifies New York ethics rules for lawyers that are at issue. The first is Rule 1.7, which bars lawyers from representing a client “if a reasonable lawyer would conclude that … the representation will involve the lawyer in representing different interests.” There is an exception if the lawyer believes he can give diligent representation to each client, and each client gives informed consent in writing.

Another ethics rule that could apply is Rule 5.3. It says a lawyer is responsible for the conduct of nonlawer retained by the firm if he has supervisory authority over the nonlaywer and “should have known of the conduct so that reasonable remedial action could have been taken” to mitigate the consequences of the conduct.

New York University law professor Stephen Gillers tells the Times that Boies’ loyalty to the newspaper would not be adversely affected if he simply sought to help Weinstein unearth facts that would have persuaded the Times to spike the story.

“On the other hand,” Gillers said, “if Boies assisted Weinstein in targeting the integrity of Times journalists as a way to prevent the story from running or, failing that, to discredit the reporting if it did run, that would certainly be disloyal to his client.”

Washington University law professor Kathleen Clark tells NBC it’s hard to believe Boies didn’t know about Black Cube’s deception in its activities because it reportedly submitted reports to the law firm that were passed on to Weinstein.

“One of the problems is the investigator hired was engaged in deception and developed an elaborate ruse to mislead a woman who apparently was allegedly raped by Weinstein,” Clark said. “The private investigator was essentially engaging in a fraudulent scheme and lawyers are not permitted to engage in fraud.”