Did ExxonMobil put Louisiana alligators on a Mississippi oil waste disposal site to help monitor the cleanliness of the land? Or did wild gators native to Mississippi simply spot a comfortable home and move in?

That question could be key to an upcoming ruling by the Mississippi Supreme Court, which has been asked to decide whether a lawsuit by a neighbor over an alleged infestation of gators on the 85-acre Wilkinson County site should be allowed to go forward, the New York Times (reg. req.) reports. 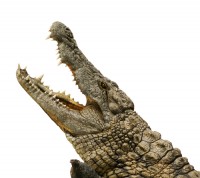 Alligators are a protected species under federal and state law, so Exxon couldn’t simply eliminate the animals from its site even if the company wanted to. However, even the state wildlife department, which says it should have the power to decide how to manage alligators, notes in a court brief that “A landowner who lures or physically confines wild alligators may well be liable.”

Exxon says it had nothing to do with the gators coming onto the property and is legally banned from eradicating the wild animals. The company also points to the statute of limitations, arguing that it should not be held responsible for claimed conduct that occurred well over a decade ago, according to the newspaper.

A trial court dismissed the 2008 suit brought by the plaintiffs, Tom and Consandra Christmas. They say they don’t feel safe building a home and raising livestock on a 35-acre tract they purchased, due to of the proliferation of gators on the Exxon property, and they are seeking compensation for the reduced value of their land. However, an appeals court revived their suit. Now the state’s highest court must decide the issue, following an appeal by Exxon.

It appears that at least one of the judges may be feeling the couple’s pain, the Times notes.