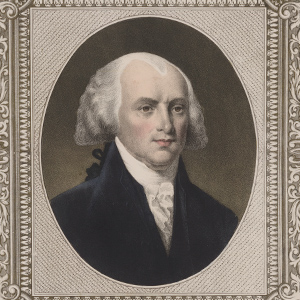 Portrait of President James Madison courtesy of the Library of Congress.

James Madison likely replaced several sheets of his notes chronicling the constitutional convention to distance himself from his own statements that later became controversial, according to a Boston College law professor who studied the changes.

Law professor Mary Sarah Bilder has published her findings in a book that will make it “impossible to view Madison’s role at the convention and read his Notes in the same uncomplicated way again,” the Wall Street Journal (sub. req.) says in a book review. The Washington Post also has a story on Bilder’s book, Madison’s Hand: Revising the Constitutional Convention.

Madison’s account of the 1787 convention, known as Notes of Debates in the Federal Convention of 1787, was published in 1840 after his death, Bilder writes in an article for the History News Network. His notes serve as the authority on the convention for historians, lawyers and judges.

But the published notes reflect revisions, Bilder says. “The additions appear in various ink shades, with handwriting, some youthful, some with the shake of Madison’s later years,” Bilder writes for the History News Network. “Madison even added slips of paper with longer revisions.”

Madison’s original notes were originally taken as a legislative diary for himself and likely for Thomas Jefferson, who was representing the new government under the Articles of Confederation in Paris, Bilder says. Madison completed the notes two years later, and then began to convert the diary into a record of the debates.

“Along the way,” Bilder writes for the History News network, “he converted himself into a different Madison. In the original Notes, Madison was annoyed and frustrated. Slowly by altering a word here, a phrase there, he became a moderate, dispassionate observer and intellectual founder of the Constitution.”

He also likely replaced several sheets containing his own speeches in the years immediately after the convention to distance himself from statements that became controversial, Bilder writes.

One revision concerned slavery, Bilder told the Washington Post in an interview. As the slave trade fell into disfavor after the convention, Madison added language that suggested he had condemned it during the convention as “dishonorable to the national character.”

Madison had never spoken against slavery or used the words, while others at the convention did, Bilder said. The words Madison claims to have spoken bore “an uncomfortable resemblance to the same comment” made by a delegate from Maryland as recorded in Madison’s original notes, she said.

Madison also may have made revisions to avoid embarrassment over his vote in favor of a proposal to allow presidents to serve “during good behavior,” which would have given the president life tenure. After controversy arose over claims of monarchist sentiments at the convention, Madison added an explanation to the notes. He claimed his vote represented a tactical ploy to “alarm” others enough to support a limit on presidential tenure. Madison himself served as president from 1809 to 1817.

Other changes seek to promote Madison as a state’s right supporter, though he had given a speech promoting federal veto power over state laws, Bilder told the Post.

Bilder believes most of Madison’s changes were intended to express his evolving sense of what was significant at the convention, rather than being opportunistic, the Wall Street Journal points out. She expresses that view in her History Channel article.

“The revisions do not detract, but enhance Madison’s manuscript,” Bilder wrote. “Madison’s Notes were revised as he changed his understanding about the convention, the Constitution, and his own role.”