Did Trump break the law by firing Comey? He hints at 'tapes' in early morning tweets 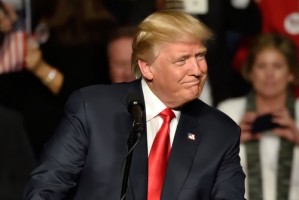 In a series of tweets early Friday morning, President Donald Trump suggested he may have proof of what was said in his previous conversations with fired FBI Director James Comey.

“James Comey better hope that there are no ‘tapes’ of our conversations before he starts leaking to the press!” Trump wrote. The New York Times and the Washington Post covered Trump’s tweets.

The tweets follow a report in the New York Times that Trump had asked Comey to pledge his loyalty to the president. According to the two anonymous sources cited in the story, Comey had replied that he could give Trump his “honesty.” When pressed further, Comey reportedly agreed to give Trump his “honest loyalty.”

Trump also appeared to be unhappy with press reports about shifting White House explanations of Comey’s firing. Initial reports indicated Trump acted after receiving a memo outlining the case against Comey by Deputy Attorney General Rod Rosenstein. On Thursday, Trump said he had made the decision to fire Comey before receiving the memo.

In his tweets on Friday, Trump wrote that, “As a very active president with lots of things happening, it is not possible for my surrogates to stand at podium with perfect accuracy!” He also suggested accuracy might be improved by handing out written responses rather than holding press briefings.

The controversy over Comey’s firing during the FBI’s investigation into Russian influence has led some to question whether Trump was guilty of obstruction of justice. The New York Times spoke with experts for their take on the issue.

One obstruction law is Section 1512 of Title 18, which provides punishment of up to 20 years in prison for anyone who corruptly “obstructs, influences or impedes any official proceeding.” Though Trump had the authority to fire Comey, theoretically he could violate the law if the firing was carried out with corrupt intentions.

Proving mental state is difficult, however. Obstruction would have to be Trump’s specific intent. And Trump’s public statements in an interview on Thursday indicated he had several reasons for firing Comey.

Trump told NBC News that Comey is “a showboat, he’s a grandstander. The FBI has been in turmoil.”