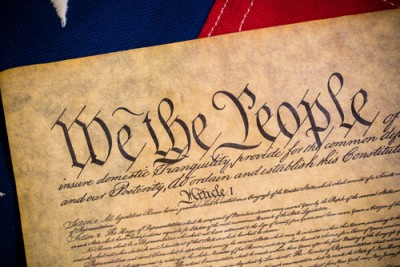 Democratic U.S. Rep. Carolyn Maloney held a news conference with the experts outside the headquarters of the New York Times, one of the news organizations banned from the press briefing, report Newsday, the New York Daily News, the Observer and the Associated Press.

Civil liberties lawyer Norman Siegel, the former leader of the New York Civil Liberties Union, called for a lawsuit by the news media that challenges the exclusion as prohibited viewpoint discrimination under the First Amendment.

Press secretary Sean Spicer said during the briefing that “we’re going to aggressively push back. … We’re just not going to sit back and let, you know, false narratives, false stories, inaccurate facts get out there.”

A press release announcing the briefing cites a 1977 federal appeals court decision, Sherrill v. Knight, in which the Nation sued for denial of a press pass. The U.S. Court of Appeals for the D.C. Circuit said in that case that arbitrary or content-based criteria for issuing press passes is barred under the First Amendment.

Besides the New York Times, news organizations banned from the Friday press briefing were CNN, the Los Angeles Times, the New York Daily News, Politico, BuzzFeed, BBC, the Huffington Post and the Guardian. Time and the Associated Press boycotted the briefing to show support for the banned media.

White House press secretary Sarah Huckabee Sanders told the New York Times that all the news media was represented because pool reporters were invited. “We decided to add a couple of additional people beyond the pool. Nothing more than that,” Sanders said.

Siegel said he was also troubled by the Obama administration’s decision to exclude Fox News from press access for a brief period in 2009. According to the Washington Post, the incident involved an attempt to bar the news organization from interviews with pay czar Kenneth Feinberg. Other media outlets protested the exclusion.