House resolutions decry over-discipline in schools, urge tech access for those with disabilities 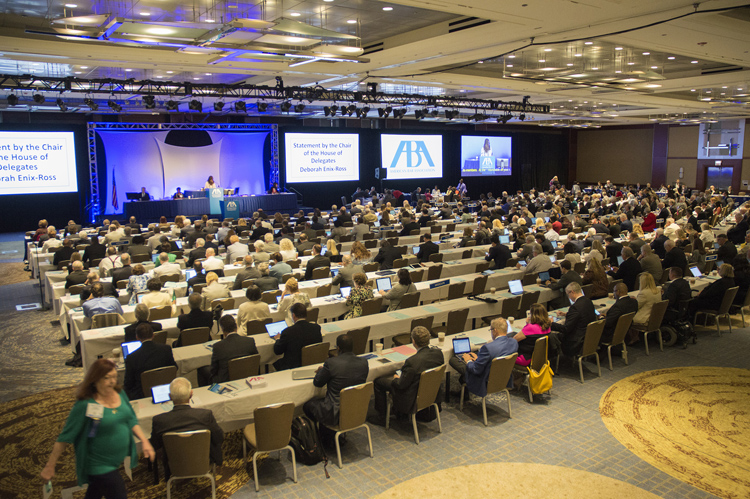 The ABA House of Delegates on Monday during the ABA Annual Meeting in Chicago. Courtesy ABA Media Relations.

Technological access for those with disabilities and curbing the school-to-prison pipeline were the focus of two resolutions brought by the Commission on Disability Rights before the ABA House of Delegates on Tuesday. Both were passed with overwhelming support.

Resolution 116B was prompted by concern for the “disproportionate impact of over-discipline on students of color, students with disabilities, and LGBTQ students, resulting in disparate push-out rates and juvenile justice system or prison interactions.”

To that end, the resolution urges that laws and policies be adopted to largely prohibit out-of-school suspension and expulsion for children in pre-kindergarten through second grade. The two exceptions cited would be if “(1) the student poses an imminent threat of serious physical harm to self or others that cannot be reduced or eliminated through the use of age-appropriate school-based behavior interventions and supports, and (2) the duration of the exclusion is limited to the shortest period practicable.”

“Whether there’s a disability, whether there’s a problem at home, suspension is not the answer to these issues,” said Maryland delegate Robert T. Gonzales, chair of the Commission on Disability Rights.

For that same pre-K to second-grade age group, the resolution urges that schools contact law enforcement “only where there is an imminent threat of serious physical harm to the student or others that cannot be reduced or eliminated through the use of age-appropriate school-based behavioral interventions and supports.”

“The decriminalization of this kind of activity is extremely important,” Gonzales said.

The resolution also calls for required ongoing training for teachers, administrators and other school staff on subjects like “functional behavior assessments and behavior intervention plans, the implementation of social emotional learning programs, the use of restorative practices and trauma-informed practices, the identification and evaluation of students with disabilities, and the implementation of individualized academic and behavior supports for students with disabilities.”

In Resolution 116C, the House voted to urge courts and government entities to interpret Titles II and III of the Americans with Disabilities Act as applying to technology, and goods and services delivered via technology.

A revision was entered to specify that the interpretations be “subject to all statutory requirements, limitations, exceptions, exemptions, and defenses” and that the technology be made accessible to all people, including those with “visual, hearing, manual, and other disabilities.”

“Today I’m here as a mythbuster,” said Scott LaBarre, a member of the ABA Board of Governors. LaBarre said that the first myth he wanted to bust was that his disability was a terrible affliction.

“I do well, I don’t regret the fact that I’m blind,” LaBarre said. “In fact, in many ways, being blind may have made be a better person than I would have otherwise been.”

But the second myth he had to debunk was that the digital age had removed most barriers for people with disabilities. If a piece of technology was not designed in a way that makes it compatible with assistive technology like screenreaders, then it is as useless to him as having the information printed on paper, he told delegates.

The accessibility of technology to those with disabilities has been an ongoing issue. Many websites and online retailers are not currently usable by people with visual disabilities who use screenreaders, for example. Legal technology is no exception, and the final section of the resolution explicitly references “all technology relating to the provision of legal services”.

LaBarre got a laugh from the House when he noted that when the ADA was signed in 1990, “Al Gore had not yet invented the internet,” and so the act did not explicitly reference online spaces. He called on the delegates to support urging the courts to recognize the ADA as applying to those spaces and technologies.

The ABA is currently in the beta-testing stage of launching its new website, and LaBarre said he was greatly encouraged that every page he’d tested had been accessible to him. He praised the association’s commitment to making sure that the website would be accessible before it launched.

A third resolution by the commission that would have urged Congress to establish a private right of action for violations of the Air Carrier Access Act was withdrawn, and Gonzales told the delegates that they expected to bring it back at the ABA Midyear Meeting.