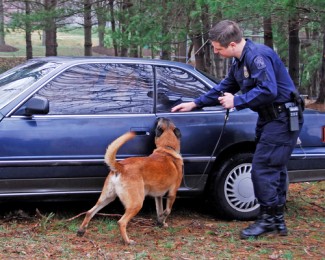 Two dog sniff cases to be heard by the U.S. Supreme Court on Halloween haven’t snared a lot of press, but they could have an impact on the right to privacy in years to come, a law professor asserts.

In one of the cases, Florida v. Harris, the court is asked to decide whether a dog’s alert establishes sufficient probable cause to search a vehicle. The case asks the court to determine how good the dog’s accuracy record must be, Meyer says. He says dogs aren’t always right, and he offers an example from the time he and his wife visited the U.S. Supreme Court for a law clerk reunion.

“My mistake was to drive a car in which our dog—a tennis-ball-loving Australian shepherd—often rode,” he wrote. As he drove up to the court’s underground parking garage, a guard and his bomb-sniffing German Shepherd circled the car. “The bomb dog suddenly perked up, and the officer coldly instructed me to open the trunk of my car. I watched as the court’s canine rose up on its haunches—tail wagging—and snagged from inside one of my dog’s prized tennis balls. No bombs or contraband were found.”

The second case, Florida v. Jardines, asks whether officers may take a dog to the front porch of a home to sniff for possible marijuana inside. “If the court rules for the government in the home-sniff case, it is hard to see why the police could not station drug-sniffing dogs outside the entrances to every school, supermarket and movie theater as a routine form of drug interdiction,” Meyer writes. “Moreover, today’s dogs will give way to tomorrow’s high-tech contraband-scanning devices that, under the reasoning pressed in the dog cases, would free the government to conduct routine scans of people’s homes or their bodies for all manner of contraband.”