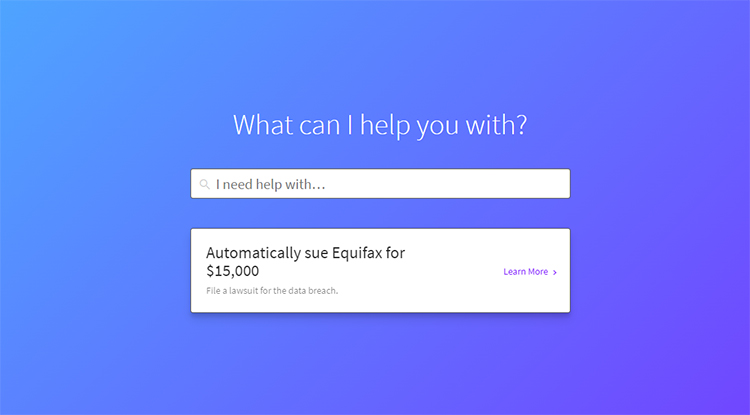 Joshua Browder has unleashed his legal chatbot, DoNotPay, for those affected by the Equifax security breach.

Multiple outlets reported Monday that DoNotPay will allow users to generate complaints against Equifax without having to hire a lawyer. The credit giant disclosed last week that it had been victimized by a massive data hack, potentially compromising more than 143 million U.S. customers.

Browder, a 2017 Legal Rebel, told VentureBeat that DoNotPay can file negligence claims on behalf of individuals in all 50 states. There is also an option to ask for the maximum allowable damages under state law, which in some states could be as high as $25,000. Users answer a series of questions and the chatbot populates a PDF form that can be filed in a small claims court.

“It is particularly exciting that a lawyer is never needed in the process. The class action lawsuit against the company will only give successful consumers around $500 (with the rest going to greedy lawyers in commissions),” Browder said to VentureBeat. “I hope that my product will replace those lawyers, and, with enough success, bankrupt Equifax.”

The chatbot currently has options available for New York and California residents. For other states, users are told to check back in 12 hours. Browder told the ABA Journal in an email that the site is experiencing traffic issues.

According to USA Today, 23 class action lawsuits have already been filed against Equifax, including one filed in Oregon on the same day the company announced the breach.