Don't see stand-your-ground issues? Maybe you should ‘give up your bar card,’ DA says 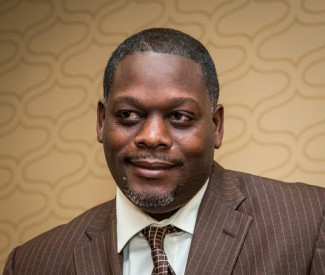 Dallas County District Attorney Craig Watkins told lawyers at the ABA Midyear Meeting on Friday that they have a responsibility to work to revise stand your ground laws.

More often than not, Watkins said at a public hearing, it is minorities who “find themselves on the wrong end of a bullet” when shooters cite such laws to justify their actions. If you don’t understand the unfairness, he said, “maybe you need to give up your bar card.”

Watkins spoke at a public hearing examining the impact of such statutes. The sponsor, the ABA’s National Task Force on Stand Your Ground Laws, is planning three more regional hearings.

Texas passed a law in 2007 that gives private citizens the right to use deadly force in the face of imminent danger to their homes, vehicles and workplaces. Watkins says the Texas law has a laudable purpose—giving people the right to protect their homes and families. But some people in control of the system, he said, don’t understand it is not justifiable to take someone’s life because they fear someone based on the color of their skin.

As an example of the problem, Watkins cited the case of Trayvon Martin, the unarmed Florida teen who was fatally shot during a trip to buy Skittles. Lawyers for the accused shooter, George Zimmerman, initially indicated they would rely on the state’s stand your ground law as a defense. He is still awaiting trial. If the case had occurred in Dallas County, Watkins said, Zimmerman would already have been tried.

Another speaker, Texas State Rep. Garnet Coleman, D-Houston, said the problem with stand your ground laws is that they allow people to take action based on a perception of danger. “Today young black men are considered to be dangerous by default,” he said.

Hoekstra joined with a Ph.D. candidate to study 21 states that passed stand your ground laws between 2000 and 2010. They found that homicide rates increased by about 8 percent in adopting states, relative to other states over the same period. At the same time, the rates of robbery, burglary and aggravated assault did not decline after adoption of the laws relative to other states.

“To put it bluntly,” Hoekstra said in the written testimony, “when you make it easier for people to use deadly force, you get more of it. In contrast, there is not a broader benefit in the form of deterrence.”

The most emotional part of the public hearing came when a Texas woman spoke about a violent confrontation in her home that could have ended in her death if she didn’t have a gun. 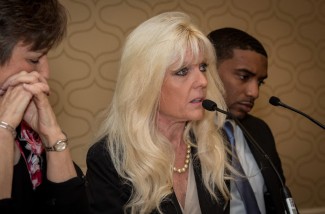 Victim Laura Teames tells of retrieving a gun to defend herself. Photo by Kathy Anderson.

Laura Teames, who has since changed her name to Laura Kenna, said she was expecting friends when she opened her door on Feb. 25, 2011, and was confronted by her ex-husband, who pointed two guns at her face. He ordered her to her bedroom and shot her twice in the legs when she refused his orders to get in bed.

Teames’ said she seized an opportunity when her ex-husband went downstairs to make sure the doors were locked to keep police out of the home. Teames managed to get up, locked the door and retrieved a gun from her safe. Teames says her ex-husband returned and shot the door open, and at that point she shot him. He dropped to the floor, got back up, and Teames shot him again. He survived but was seriously wounded.

“I wouldn’t be here today if I was not able to retrieve that weapon,” Teames said. “I couldn’t have gotten away. I couldn’t have run. … There was no other way out.”

Teames was not charged. Her ex-husband has been charged with aggravated assault in a domestic case and burglarizing a home to commit a felony, Teames said.