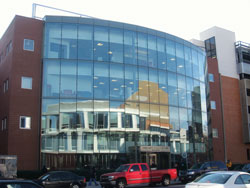 Drexel University’s law school is changing its name to the Thomas R. Kline School of law to honor the Philadelphia trial lawyer who is donating $50 million to the school.

Thomas Kline’s gift is the largest in the history of the law school, which opened in 2006, and is among the largest donations ever made to a law school, according to Drexel University President John Fry. USA Today, the Philadelphia Inquirer and the Legal Intelligencer covered the news, while the school issued this press release.

At a media briefing on Tuesday, Fry said “it’s been a tough number of years” for legal education, according to the Legal Intelligencer account. “I think this gives us an opportunity to put this relatively new law school on firm financial footing … and establish it as a real force for the practice of trial advocacy,” he said.

The law school was previously named for $15 million donor Earle Mack, who agreed to remove his name to encourage more donor funding.

Drexel released a list showing the largest law school donations for the last 15 years. The largest donation is $130 million, made by James E. Rogers to the University of Arizona’s law school. Kline’s donation is fifth on the list.