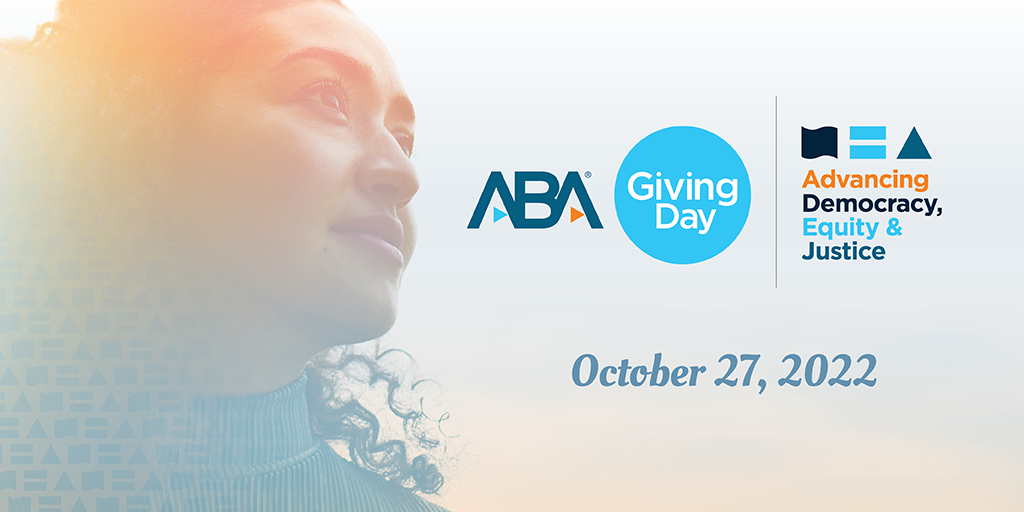 Amid the COVID-19 pandemic, the ABA’s members, volunteers and donors have answered the call to help increase legal services and transform the justice system.

The Fund for Justice and Education, the ABA’s charitable arm, hopes to build on that momentum during this year’s ABA Giving Day. Its goal for the Oct. 27 initiative—which has the theme Advancing Democracy, Equity & Justice—is to raise $300,000 for programs that promote civic education and voting rights, advocate for environmental and social justice, improve access to justice and uphold the rule of law.

In addition to its goal to far exceed last year’s fundraising total, the FJE aims to inspire more than 1,000 donors to support causes that are important to them.

“Contributions from ABA members and the public help uphold the rights of the most vulnerable, protect the rule of law and ensure a more inclusive justice system now and in the future,” ABA President Deborah Enix-Ross said in a news release. “Most importantly, donations empower attorneys, local civic leaders and community members to be bold, purposeful advocates for justice.”

ABA Giving Day will be held in conjunction with the National Celebration of Pro Bono, which runs from Oct. 23-29. The campaign began accepting donations on Oct. 13, and has already raised more than $47,000.

This year, donors can contribute to the Fund for Justice and Education Annual Fund as well as to 16 entities and programs that advance democracy, equity or justice:

• The Section of State and Local Government Law’s Defending Democracy initiative, which aims to educate the public about the important role of election workers.

• The Section of Civil Rights and Social Justice’s Voting Rights & Election Protection Project, which empowers attorneys to advocate for voters’ access to the ballot and nonpartisan redistricting.

• The Division of Public Education Cornerstones of Democracy program, which promotes restoring confidence in the nation’s institutions and understanding the rule of law through civics, civility and collaboration.

• The Commission on Sexual Orientation and Gender Identity, which seeks to secure equal treatment of lesbian, gay, bisexual and transgender individuals in the legal profession and justice system.

• The Commission on Women in the Profession, which works to identify and remove systemic barriers that hinder the success of female lawyers.

• The Judicial Division and Council for Diversity in the Educational Pipeline’s Judicial Clerkship Program, which gives law students of color the opportunity to participate in research and brief-writing, observe oral arguments and network with judges.

• The Legal Opportunity Scholarship Fund, which encourages racial and ethnic minority students to apply to law school and provides them with three-year scholarships.

• The Commission on Law and Aging, which aims to secure and strengthen the legal rights, dignity, autonomy and quality of care of older adults.

• The Commission on Homelessness and Poverty, which helps develop legal solutions that remove barriers to housing, employment, treatment and education for individuals experiencing homelessness.

• The Criminal Justice Section’s Legal Education Police Practices Consortium, which combines the expertise of the ABA and 60 law schools to develop and implement better police practices throughout the United States.

• The Section of Environment, Energy and Resources, which advances environmental justice and addresses the disproportionate effects of policies and practices on communities of color, indigenous communities, low-income communities and other vulnerable populations.

For more information or to donate, visit the ABA Giving Day website.