'The sun is rising on the rule of law in the United States,' says incoming ABA President Reginald Turner 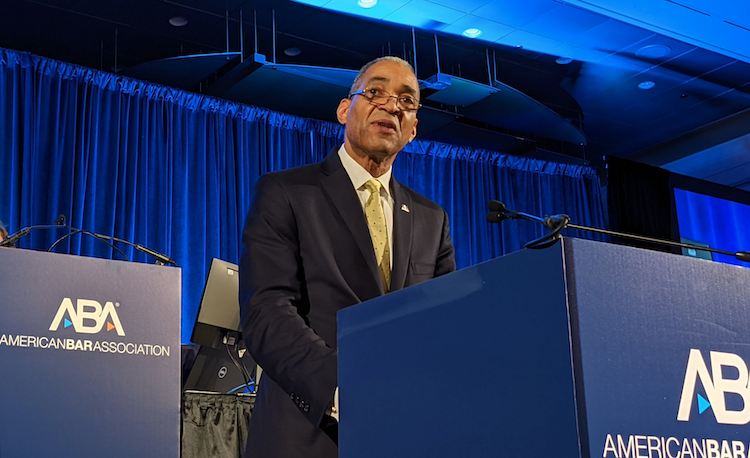 In accepting his position as president of the American Bar Association, Reginald M. Turner shared the story of a half sun painted on the back of an armchair owned by Founding Father and former President George Washington. Fellow Founding Father Benjamin Franklin wondered whether the sun was rising or setting.

“He eventually concluded, with happiness, that the sun was indeed rising. Some may believe that a similar quandary faces us when it comes to the rule of law and the bar associations throughout our nation today,” said the Detroit lawyer, speaking Monday before the ABA’s House of Delegates at the 2021 ABA Hybrid Annual Meeting. Some delegates convened in person, and some attended remotely.

“It’s clear to me that the sun is rising on the rule of law in the United States and in free societies throughout the world, and it remains a powerful beacon of hope for those who do not now live as free people,” Turner added.

As examples of the rule of law being promoted throughout the country, he mentioned the ABA Model Rules of Professional Conduct, law school accreditation, section and division work and government advocacy.

“As your incoming ABA president, I am a believer in this house as the voice of our profession. I believe the American Bar Association is essential for excellence among lawyers and judges, as preparers for the next generations of lawyers, and as champions for equal justice under law,” said Turner, who underscored the importance of public trust from the legal profession.

Additionally, he said ABA members “want and need” the organization to continue addressing public policy that’s central to the administration of justice, such as legal aid funding, voicing support of an independent judiciary, and speaking in support of criminal justice reform, particularly when it reflects racism and structural injustice.

Turner also asked members to reach out and mentor young lawyers and law students and demonstrate how bar associations can make a positive difference.

His prior ABA service includes chairing the House of Delegates’ Rules and Calendar Committee from 2016 to 2018 and the Commission on Racial and Ethnic Diversity in the Profession from 2011 to 2014.

The son of a police officer and a librarian, Turner grew up in Detroit, and his speech included memories of the city’s 1967 riot. Afterward, his parents looked for ways for the family to heal, and that included a cultural exchange program called Focus Hope, which paired city and suburban residents to break down racial and economic barriers.

The experience, he added, led to significant passion for diversity in his work as a lawyer.