Education, veterans' rights and expanding services for ABA members will be focus of Klein's term 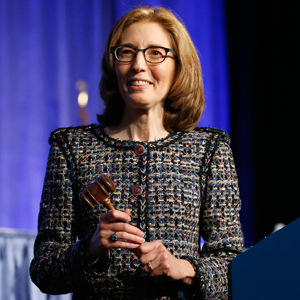 Linda Klein will be the president of the ABA for the 2016-2017 term. Photo by Tony Avelar.

In ABA President Linda A. Klein’s inaugural speech on Monday at the association’s annual meeting in San Francisco, she outlined three ambitious initiatives for her year-long term. These initiatives will help veterans with legal problems; ensure children get quality educations; and assist lawyers, especially small-firm and solos, in getting the tools and services that might free them up to spend more time practicing law.

“So let’s focus on the basics by doing things that everyone—all lawyers and the public—can get behind,” Klein said. “Let’s use our talents and the law to bring fairness to our communities. Let’s focus on delivering to our members what they need to better serve their clients.”

Klein pointed out that the ABA has done great things, such as supporting the creation of the Legal Services Corporation and developing model ethics rules, and added, “We will continue to do great things. Public service, the rule of law, diversity—these basics are in our DNA.”

On a listening tour during the past year, Klein met with groups of lawyers around the country and asked what they need to better serve their clients.

“I learned that lawyers want to do more pro bono and reduced-fee work, but they can’t,” Klein said. “The burdens of running a law practice detract from the time they have to practice law.” 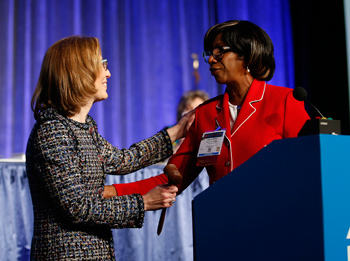 Paulette Brown (right), who was the ABA president for the 2015-2016 term, passes the gavel to Linda Klein. Photo by Tony Avelar.

A lawyer in Fargo, North Dakota, told her that his secretary quit to take a job at a car dealership because it gave her health insurance for her family, something the solo practitioner couldn’t afford to offer. Another attorney in Denver told her his time for practicing law is limited because he’s busy sending clients’ bills, trying to collect for his services and paying his own bills.

“I heard those comments over and over again across the company,” Klein said.

As a result, the association’s main focus this year will be its members, current and future. A new working group in the Standing Committee on Membership will explore development of new and expanded services.

A web portal in development called ABA Blueprint will be a one-stop shop for helpful resources such as a virtual receptionist, time-and-billing software, marketing help, retirement and life insurance plans, and more.

“Working with your bars, the ABA will enhance our resources that help our members—especially solo practitioners and those in small firms, that’s 76 percent of all U.S. lawyers—with marketing, managing their practices and getting out ahead of what’s new in technology.”

Also, this year the ABA’s annual National Pro Bono Celebration will be extended past the end of October and include Veterans Day, November 11, for helping veterans. And those providers will be asked to reprise such efforts during days around Memorial Day the following May.

Klein told the story of an 82-year-old disabled veteran of the Korean War who was homeless and living in his truck. He’d been told his military records had been lost and thus had no evidence to prove his claim for VA disability benefits. With the help of a pro bono lawyer, the records were found, and he got his benefits checks. 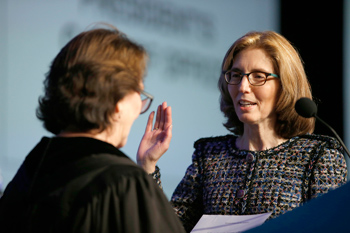 Linda Klein is sworn into office by Justice Carol Hunstein of the Georgia Supreme Court. Photo by Tony Avelar.

More than 40,000 veterans are homeless and more than 13 percent of veterans live below or near the poverty line, Klein said.

To address Klein’s focus on quality education for children, she is establishing an education commission, chaired by Reginald Turner, a member of the House of Delegates from Michigan.