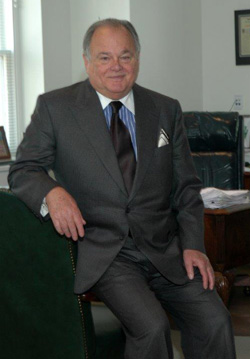 National Security Agency-leaker Edward Snowden called on one of the best-known Espionage Act lawyers last year when he entered into plea negotiations with the United States government.

According to a Tuesday article in the New York Times, Plato Cacheris, a prominent Washington, D.C. lawyer and name-partner at Trout Cacheris, has been working for nearly a year to get Snowden a deal from the United States government. According to the Times, Snowden hired Cacheris, who has previously represented convicted spies Robert Hanssen and Aldrich Ames, and convicted leaker Lawrence Franklin, in the hopes of securing a plea bargain that would spare him significant jail time. Snowden, who fled to Moscow last year after being charged with multiple violations of the Espionage Act stemming from his decision to leak details of N.S.A. eavesdropping programs to The Guardian, is facing 30 years in prison.

Cacheris has plenty of experience with accused spies and moles. Both Ames and Hanssen were looking at the death penalty for their betrayals. Cacheris got a deal for Ames, who pleaded guilty in exchange for a life sentence. Seven years later, Cacheris secured a similar plea deal for Hanssen, sparing him the death penalty. His firm bio states that he has represented several high profile clients ensnared in political scandals, including Monica Lewinsky; Watergate figure and former U.S. Attorney General John Mitchell; and Iran-Contra figure Fawn Hall.

“Snowden is interested in returning home,” said Ben Wizner, an American Civil Liberties Union lawyer who also represents Snowden, to the Times. “He is and always has been on America’s side. He would cooperate in extraordinary ways in the right circumstances. But he does not believe that the ‘felon’ label is the right word for someone whose act of conscience has revitalized democratic oversight of the intelligence community and is leading to historic reforms.”

Not everyone was ready to roll out the welcome mat. “He is accused of leaking classified information, and there is no question his actions have inflicted serious harms on our national security,” said Marc Raimondi, a Justice Department spokesman, to the Times.

In a phone call with the Times, Cacheris said: “It’s not something that I want to discuss, so I have no comment.”