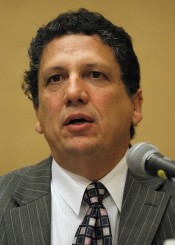 Efforts to thwart human trafficking in workers has increased significantly in recent years, and the pace will quicken as employment rights intersect with human rights as an enforcement tool, shining a spotlight on employers.

“This is not just a [Justice Department] problem, not just a criminal problem,” Robert Canino, a Dallas attorney for the Equal Opportunity Employment Commission, told the audience Sunday morning at an ABA Annual Meeting program. He was explaining how he was able to develop new approaches to human trafficking violations.

Prosecutors sometimes have been stymied by having to prove violations beyond reasonable doubt. But Canino and others figured out that discriminatory practices against groups of workers imported into the United States could be cast differently for civil enforcement. For example, Canino said, sex workers who basically are enslaved are experiencing a form of sexual harassment, albeit extreme.

The program, titled “The Real Cost of Human Trafficking: How Can Employers and Worker Advocates Prevent Labor Trafficking and Protect Trafficking Victims,” was sponsored by the ABA’s Section of Labor and Employment Law.

In cases with horrific facts that were difficult to prove beyond a reasonable doubt, the EEOC has been able to bring civil actions requiring only a preponderance of the evidence. The idea didn’t take hold at first.

“I thought, wow, we could prove [a case] by 51 percent, more-likely-than-not evidence,” Canino said, recalling a meeting in 2000 with representatives from various agencies brought together by the DOJ. At the time, he says, he got no traction in the room.

Now he and others are bringing such cases, as labor law and human rights law join forces.

“We really are looking at a new way of looking at a very old issue,” said panelist Ana Avendaño, a lawyer and the assistant to the president of the AFL-CIO for immigration and community action. Human trafficking of workers tends to be a series of violations, and sometimes it takes several of them to constitute a trafficking violation—such as withheld wages, excessive deductions from wages, workplace safety, work hours and the like. 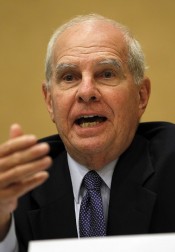 Panelist Joseph Fleming, a partner in the Miami office of Greenberg Traurig who represents businesses and employers, often sounded like one of the victim advocates beside him, describing specific cases and details of abuses by employers. But it amounted to advice like that he gives his clients.

Employers sometimes get immigrant employees through contractors who might be using fraudulent or coercive methods in hiring them, violate wage and hour laws or hold them in debt bondage.

“If you’re contracting out and get a special rate, you’re on notice,” Fleming said, adding that if employers tell the contractors that violations of the laws are not acceptable, it can help in their defense if an action is brought against them. “You show good faith, and that goes a long way to defend you.”

Such workers often have difficulty with government bureaucracies when they complain of such problems. Sometimes they are not properly documented to be in the U.S., or their papers might be held by the employment recruiters who brought them here. 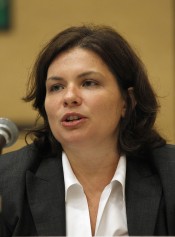 The Department of Homeland Security has an ombudsman to help push though grievances that run into bureaucratic walls, with authority through its component agency, the U.S. Citizenship and Immigration Services.

“We provide individual case assistance,” said ombudsman Rena Cutlip-Mason, acting chief of the Humanitarian / Family Branch of DHS. Lawyer need to have written authorization from their clients to work through her program.

While employers large and small can run into problems if they use contractors who supply workers whose rights are being abused, those in the audience might be liable for the same, Fleming said. He noted that two women had been nominated and dropped out of the process that eventually led to Janet Reno becoming the first woman attorney general of the U.S. They had failed to pay withholding taxes for domestic workers, including a nanny.

“People like you suddenly have a wage and hour matter in your home,” Fleming said. That sometimes is called “wage debt,” he explained, and “just the title of what you’re accused of puts you in jeopardy.”