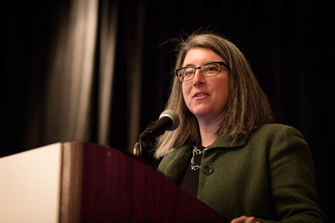 Cindy Cohn was always a compelling choice to give the keynote speech at ABA Techshow. The Electronic Frontier Foundation executive director has been involved in numerous high-profile court cases against the National Security Agency over its mass surveillance data-collection programs.

Then the FBI versus Apple controversy happened, giving her keynote speech additional weight and timeliness. Cohn received a rousing reception as she addressed a capacity crowd inside the Continental Ballroom at the Chicago Hilton on Friday afternoon, including a standing ovation. The address covered her career as an attorney with the EFF, as Cohn detailed her struggles with the federal government, especially in the Jewel v. NSA case, in which the EFF sued the NSA for its surveillance of AT&T customers’ communications and communications records. “The government’s ongoing quest to make sure no one can have a private conversation online has been going on for 20 years now,” said Cohn. “Liberty depends on people having a zone of privacy whether they’re online or offline.”

Cohn’s speech was partly informational, as she guided attendees through the various ways the government can collect data and justify its methods. Noting that many of those in attendance had probably heard of PRISM, the NSA program revealed by Edward Snowden that collects Internet communications from at least nine service providers in the U.S., Cohn talked about other ways the government conduct surveillance. Most notably, Cohn spoke about the subject of the Jewel case: the NSA’s “upstream collection,” where the government intercepts Internet cables to copy everything that gets transmitted on them. “This turns the entire Fourth Amendment upside down,” Cohn argued. “In this case, the government is collecting everything first and then analyzing it to sort out what they need.”

The recent FBI/Apple controversy gave Cohn’s address additional relevance to the crowd of attorneys, legal service providers and journalists in attendance—the vast majority of whom were using Apple devices to take notes, live-tweet the speech or take photos. Cohn weighed in on the dispute, in which the FBI requested that Apple build a digital backdoor allowing authorities to get around encryption protocols and access an iPhone belonging to one of the San Bernardino terror attackers.

“This isn’t really a question of privacy versus security,” said Cohn. “It’s really about security versus security. The question is whether security that keeps you protected but is flummoxing the FBI needs to be downgraded.”

As several attendees noted, the FBI/Apple controversy probably contributed to Cohn’s warm reception. Gwynne Monahan noted on Twitter that Cohn did not receive nearly as warm a welcome when she spoke at the Clio Cloud conference in 2014. Brian Focht suggested that it was because the Apple case had made things personal for many lawyers, and because it was so fresh in everyone’s minds.

Ultimately, Cohn wrapped up her speech with a call to action, encouraging the lawyers in attendance to get involved in the fight. She also encouraged them to stay vigilant and not to forget about governmental surveillance once Snowden, Apple and everything else disappeared from the headlines.

“Everything old is new again,” Cohn said. “We’ll be here 20 years from now and this fight will still be going on.”