El Chapo trial begins amid heavy security; one juror is dismissed because of anxiety 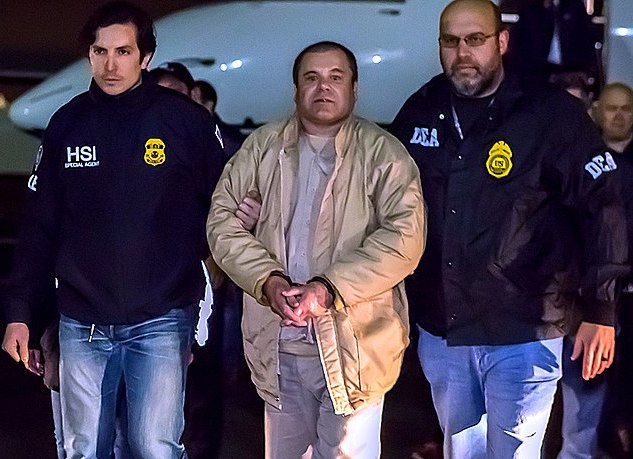 Joaquin “El Chapo” Guzman Loera in U.S. custody after his extradition from Mexico in January 2017. Photo courtesy of U.S. Immigration and Customs Enforcement via Wikimedia Commons.

Opening arguments were delayed in the trial of Joaquin “El Chapo” Guzman Loera on Tuesday after one of the anonymous jurors was dismissed because of anxiety.

The female juror said in a letter to U.S. District Judge Brian Cogan of New York City that she has been anxious and upset since jury selection, report NBC News, CNN and the New York Post. Lawyers for the prosecution and defense agreed to excuse the juror and to select a new juror, instead of picking from among six alternates already chosen.

Cogan had previously refused to excuse the juror when she burst into tears after being selected for the jury, according to the New York Post.

When Guzman travels to and from the courthouse, he will be in an armored vehicle. Snipers will be on rooftops along the way. The Brooklyn Bridge was shut down during Guzman’s trips to court over the past year for pretrial hearings.

Cogan had cited security concerns when he turned down a defense request to allow Guzman to hug his wife, a former beauty queen.

Guzman, 61, is charged in a 17-count indictment that accuses him of building a drug empire through murder and violence. He has escaped twice from prisons in Mexico and was extradited to New York in January 2017.