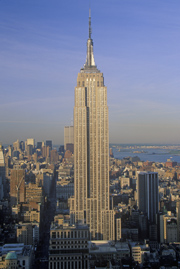 A women’s apparel designer, disgruntled after losing his job, is responsible for this morning’s Empire State Building shootings, the New York Times reports.

Raymond W. Kelly, the New York Police Commissioner, identified the man as Jeffrey Johnson, 56, and said he worked for Hazan Industries. The Associated Press reports that Johnson was laid off from his job designing accessories for the company, housed in the Empire State Building, one year ago.

Johnson reportedly shot and killed a former colleague, whom the Times reports was Johnson’s manager. Police shot and killed Johnson after he turned his gun on them. Nine bystanders were wounded by bullets, Kelly said. Mayor Michael R. Bloomberg stated that some of the victims may have been hit by police bullets during the shootout, the Times reports.

Updated at 12:12 p.m. to add a picture of the real Empire State Building.

Next:
Ex-NY Judge Is Removed from Bench for Allegedly Molesting Deaf 5-Year-Old Niece 40 Years Ago