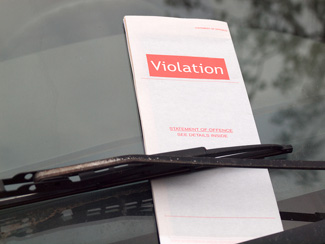 A federal statute enacted after a California actress was murdered by a stalker who got her address from state motor vehicle records also applies to parking tickets, a federal appeals court has ruled.

The complaint, which is assumed for the purpose of a motion to dismiss to be true, alleged that the ticket issued to plaintiff Jason M. Senne included his name, address, driver’s license number, date of birth, height and weight, the 7th Circuit noted.

“Mr. Senne’s appeal requires that we examine the scope of the DPPA’s protection of personal information contained in motor vehicle records and the reach of its statutory exceptions. We now conclude that the parking ticket at issue here did constitute a disclosure regulated by the DPPA, and we further agree with Mr. Senne that, at this stage of the litigation, the facts as alleged are sufficient to state a claim that the disclosure on his parking ticket exceededthat permitted by the statute,” the majority wrote. “Accordingly, we reverse the judgment of the district court and remand for further proceedings consistent with this opinion.”

Potentially, the en banc majority decision could create as much as $80 million in liability for the village of Palatine, Ill., a three-judge dissent said.

Another dissent authored by Judge Richard Posner said the majority decision, in response to a potential parking-ticket stalking situation that, as far as anyone knows, has never arisen, opens the floodgates for a potential tidal wave of frivolous class action litigation on behalf of parking scofflaws.

“From now until the statute is amended (unless today’s decision is reversed by the Supreme Court first), only a sucker would park legally in the village of Palatine,” Posner wrote.

An Electronic Privacy Information Center page provides detailed information about the DPPA and how it was enacted in response to the murder of actress Rebecca Schaeffer in 1989.

Los Angeles Times (1991): “Into the Line of Fire : Rebecca Schaeffer’s Death Led Her Parents to Fight for Gun Control”