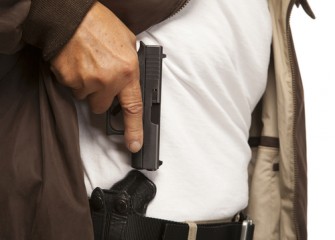 In a big win for those who favor gun control, a divided en banc federal appeals court panel on Thursday upheld, against a Second Amendment challenge, a California law restricting concealed-carry permits to individuals who can demonstrate “good cause.”

The 7-4 ruling by the 9th U.S. Circuit Court of Appeals in San Francisco “is a huge decision,” law professor Adam Winkler of the University of California, Los Angeles told the New York Times (reg. req.). “This is a major victory for gun control advocates.”

Judge William Fletcher said in the majority’s written opinion (PDF) that the Second Amendment “does not protect in any degree the right to carry concealed firearms in public,” so “any prohibition or restriction a state may choose to impose on concealed carry—including a requirement of ‘good cause,’ however defined—is necessarily allowed by the amendment.”

Still undecided in California, which has some of the strictest firearms laws in the country, is whether individuals have a right to open-carry guns for personal protection, the Los Angeles Times (sub. req.) reports.

The Thursday ruling by the 9th Circuit did not address a California law that bans open-carry, the newspaper notes.

The majority’s decision on concealed-carry permits overturned an earlier decision by a three-judge appellate panel and reinstated a federal district court ruling.