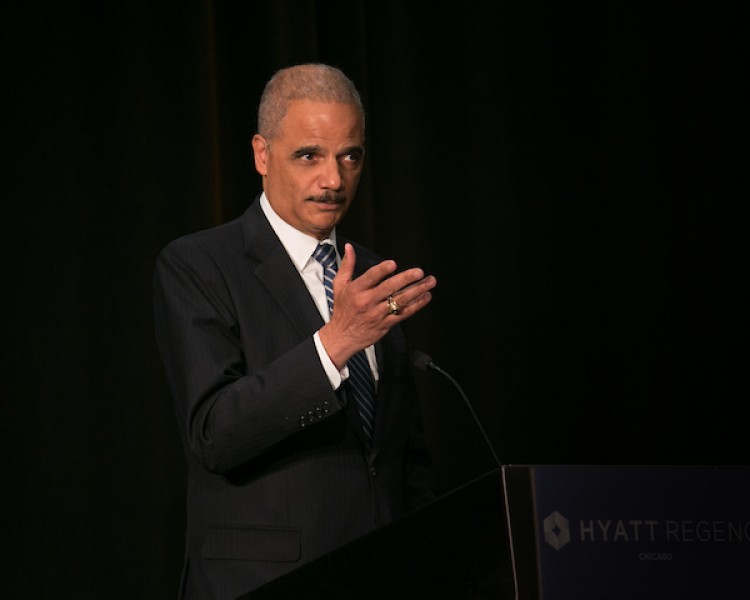 Lawyers have the power and the duty to make America a better place, former U.S. Attorney General Eric Holder said Saturday night, urging them to keep fighting “especially … in these alarming times.”

Holder’s remarks came while accepting the 2018 Thurgood Marshall Award of the ABA Section of Civil Rights and Social Justice, putting him in front of a crowd with a professional commitment to fighting injustice.

“Some of the pillars of our democracy—the judiciary, the media, our law enforcement apparatus—are under spurious but potentially effective attack,” said Holder, the nation’s first African-American attorney general and one of the longest serving in that office. “Now, as it was in Thurgood Marshall’s time, those who have the capacity to shape the world have the responsibility to use that power to stand up for and to defend these institutions.” 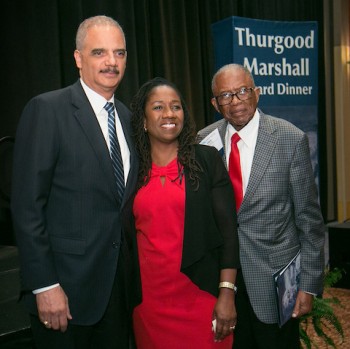 It also was echoed by Sherrilyn Ifill, president and director-counsel of the NAACP Legal Defense and Educational Fund. In introducing Holder, Ifill said she was grateful to have him in the attorney general’s office during some of the most important moments of her time as a leader.

“The day the Supreme Court decided the Shelby County v. Holder case, that afternoon, I was sitting around Eric Holder’s desk. Five days after Mike Brown was killed in Ferguson, I was with my team in Eric Holder’s office,” she said. “Having the attorney general take seriously the role of being the chief enforcer of the nation’s civil rights law means so much when you’re in the position I’m in.”

She expressly contrasted that with the behavior of the office’s current leader, Jeff Sessions, saying there was an “unending roster” of things he’d done to roll back progress on civil rights. Like Holder, she encouraged the civil rights lawyers in the room to keep fighting, noting that, as “the people for whom America has worked out,” they have power to speak out.

“Our democratic ideals and institutions are under threat like never before in my lifetime,” she said. “And the role of civil rights lawyers at such a time as this will be critical … to our survival as a democracy.”

Ifill also mentioned that she frequently is asked whether Holder is running for U.S. president, which Holder has publicly said he’s considering. He didn’t directly address the matter, but his speech had elements of a stump speech, including a challenge to the current president’s “Make America Great Again” slogan.

“To suggest that Americans were somehow greater before we began to address our shortcomings is not just failure of vision. It is also a failure of courage,” he said. “At our best, we look to the future, embracing its possibilities and welcoming its challenges.”

Holder is currently a partner at Covington & Burling—a job he also had before becoming attorney general—and chairs the National Democratic Redistricting Committee, which seeks to address gerrymandering. His tenure as attorney general was marked by active involvement in civil rights, including a personal visit to Ferguson, Missouri, after city police officer Darren Wilson killed 18-year-old Michael Brown in 2014. His Department of Justice also filed numerous statements of interest supporting plaintiffs in civil rights lawsuits.

The Section of Civil Rights and Social Justice gives the Thurgood Marshall Award to members of the legal profession who have substantially contributed to civil rights in the United States. Past recipients include Stephen Bright of the Southern Center for Human Rights; Dale Minami, who helped overturn Fred Korematsu’s 1942 conviction for violating a curfew imposed only on Japanese-Americans; and Bryan Stevenson, founder of the Equal Justice Initiative.