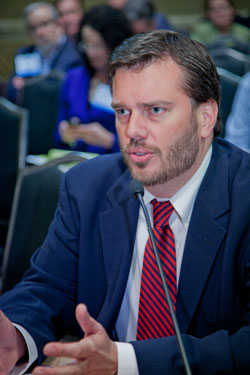 Should law firms have to report judicial campaign contributions by their lawyers and staffers? Should they include information about nonfinancial support, such as endorsements? And how should judges use that information to decide whether to recuse themselves?

Those questions were considered at a public hearing at the ABA Midyear Meeting on Friday as commenters dissected proposed amendments to model ethics rules. The need for revisions is clear, according to Adam Skaggs, senior counsel at the Brennan Center for Justice at New York University School of Law. There has been an “explosion in spending in state judicial races,” he said at the hearing, and the proposals are a “terrific start” to address the problems.

The money flowing into judicial campaigns has damaged public perception of the judiciary, according to Matthew Berg of Justice at Stake, an organization that has worked with Skaggs’ group to report on campaign spending. A 2011 survey (PDF) by Justice at Stake found that 83 percent of the public believed that judicial campaign contributions have some or a great deal of influence on judges’ decisions. States need strong recusal rules, he said, to counter the perception. 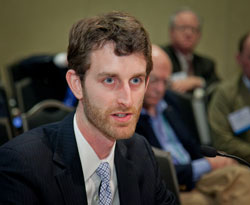 As it is currently written, the ABA Model Code of Judicial Conduct (PDF) says judges should recuse themselves when they receive campaign contributions over a threshold amount. (States adopting the rules would determine the exact amount.) A proposed change would eliminate bright-line amounts and would instead require recusal when contributions or other support are high enough to be “substantially important to the judge’s most recent campaign.” The proposal would also create a rebuttable presumption that judges know “the amount, source and value of direct and indirect campaign contributions” if they are matters of public record and reasonably available.

Judge Annette Scieszinski, a trial-level judge in Iowa, said she initially backed a set contribution amount that would require recusals when the Iowa Supreme Court considered changes to its ethics code. But she changed her mind after she learned of a flaw in that requirement: Litigants who wanted to disqualify a judge would make certain they make contributions exceeding the threshold amount.

The financial contribution provisions are part of Rule 2.11, which requires judges to disqualify themselves when a judge’s impartiality might reasonably be questioned.

The proposals debated at the hearing aren’t confined to the Model Code of Judicial Conduct. Another proposal would create a model Supreme Court Rule requiring law firms to collect information on judicial campaign contributions by their lawyers and other employees, and to report the information to their state’s supreme court. A proposed change to the ABA Model Rules of Professional Conduct would require lawyers with managerial authority in law firms to gather information about direct and indirect contributions to judicial campaigns.

An alternative proposal would require lawyers to report such information to judges hearing their cases.

Commenters suggested the proposals could go farther by:

• Addressing the need for recusal when judges are presiding over cases in which litigants or lawyers spent money opposing the judge’s candidacy.