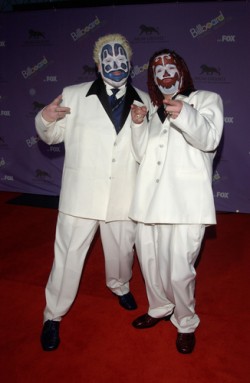 A fired publicist who also acted as a lawyer for Insane Clown Posse’s recording company has filed a suit claiming she was sexually harassed, belittled and mocked at work.

The suit by Andrea Pelligreni says she was presented with a sex toy as a present, yelled at on a regular basis, and asked to do unethical things. At one “tremendously hostile and difficult event” called the Gathering of the Juggalos she was ordered to use unsafe, unisex bathrooms, the suit says.

The suit names as defendants two members of Insane Clown Posse, Joseph “Shaggy 2 Dope” Bruce and Joseph “Violent J” Utsler, citing their supervisory roles at the company. Other defendants are Psychopathic Records; its president, William Dail; and some of its employees. The Detroit News and WXYZ have stories.

Since Pelligreni began work at the Pscyopathic in 2009, the suit says, “there has been a consistent culture of sexism and sexual harassment that has been ignored, cultivated and/or perpetuated by defendants and others in management.” Dail called Pelligreni the B-word and yelled at her on a regular basis, the suit says. She was “bullied, demeaned and emotionally abused to the point that plaintiff was in tears,” the complaint says.

Pelligreni says she was asked to do legal work because outside counsel was too expensive, and was given the title “in-house counsel” during a Department of Labor audit of Psychopathic over overtime pay. She was given the label, Pelligreni says, so she could not discuss corporate wrongdoing “under the shroud of purported ‘attorney client privilege.’ ” At other times, the suit says, Pelligreni was asked to reveal protected attorney-client information for media-related purposes.

Pelligreni says she was also asked to do illegal things, including obtaining illegal automatic weapons for a photo shoot. Her refusal to do improper things was one reason for her firing in November 2012, the suit claims.

The suit claims violations of Michigan civil-rights law and public policy, as well as intentional infliction of emotional distress.