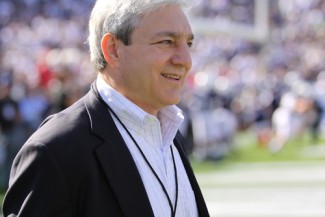 Blistered by a scathing internal report made public in 2012 concerning Pennsylvania State University’s handling of child sex-abuse allegations against a former football coach, the then-president of Penn State, Graham Spanier, responded by filing a defamation suit on Wednesday.

Naming as defendants former FBI Director Louis Freeh, who headed the internal investigation and wrote the report, and Freeh’s law firms, the suit contends that the 267-page document included a number of “demonstrably false” allegations about Spanier’s handling of the accusations against Jerry Sandusky. Then those claims were magnified in subsequent contacts with the media by Freeh and his public relations team, contends the complaint (PDF) in the Centre County Common Pleas case. The Philadelphia Inquirer provided a copy of the complaint, which also asserts a claim for tortious interference against Freeh and his firms.

Instead of giving an account of the the impartial investigation Freeh purportedly conducted, the report was “custom tailored with preconceived storylines to meet his clients’ objectives,” the lawsuit alleges. It says Freeh conducted only a relatively brief four-hour interview with Spanier, at the tail end of his probe, and wrote the report to support “predetermined ‘findings’ and ‘conclusions’” by Penn State trustees and National Collegiate Athletic Association officials.

They wanted Freeh’s report to deflect blame toward others for failing to stop Sandusky from abusing youths over a period of many years, the suit alleges, and Spanier wound up as a scapegoat. Freeh’s job was “to identify one or more ‘wrongdoers’ (never Freeh’s clients)” to blame for a crisis, and then “publicly declare the scandal resolved,” the complaint states.

His complaint asserts breach-of-contract claims against the university, alleging that Penn State and its officials breached a separation agreement with Spanier by publishing the Freeh report and by making negative comments about Spanier to the media.

Penn State declined to discuss the suit and Freeh’s office said he is traveling and unavailable for comment, reports ESPN. However, attorney Robert Heim, who represents Freeh, told the Inquirer last week that his client stood by his report.

Sandusky is now serving a hefty prison term, but the fallout continues concerning others who were at Penn State at the time. Spanier faces an ongoing criminal obstruction case over an alleged cover-up and says false allegations against him in the Freeh report have limited his ability to work.

Spanier filed the suit at this point because “[t]he criminal trial is basically on hold for now,” Elizabeth “Libby” Locke, one of the lawyers representing him, told the Pittsburgh Post-Gazette. “Dr. Spanier is anxious to vindicate his reputation and anxious to clear his name. That’s the reason for moving forward now.”

Next:
How long is too long to stay in the same job?