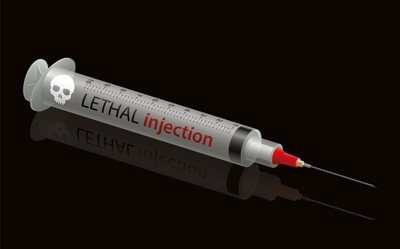 A Tennessee man was executed on Thursday after U.S. Supreme Court Justice Sonia Sotomayor warned that he was likely to suffer “torturous pain” while his suffering is shrouded “behind a veneer of paralysis.”

Billy Ray Irick was executed for the 1985 rape and murder of 7-year-old Paula Dyer, report the Washington Post, the Nashville Scene, the Associated Press and the Tennessean in stories here and here. The execution was the first in Tennessee since 2009.

Media reports said Irick snored loudly for the first five minutes of the execution, but later coughed, choked and gasped for air. One report said he briefly strained his forearms against the restraints, while another said he jolted. Then his face turned purple and he died.

The state used an execution cocktail of midazolam, intended to stop the pain, followed by the paralytic drug vecuronium bromide and the heart-stopping drug potassium chloride. The Post reports it was the first time the state used the three-drug cocktail to carry out an execution.

Sotomayor’s dissent from the Supreme Court’s refusal to grant a stay cited evidence that midazolam would not be able to stop the pain. The National Law Journal has coverage.

“Although the midazolam may temporarily render Irick unconscious, the onset of pain and suffocation will rouse him,” Sotomayor wrote. “And it may do so just as the paralysis sets in, too late for him to alert bystanders that his execution has gone horribly (if predictably) wrong.”

Irick’s lawyers had contended he was too mentally ill to be executed and that use of the execution drugs violated the Eighth Amendment ban on cruel and unusual punishment.

Sotomayor said the Eighth Amendment issue should be considered by the Supreme Court. “If the law permits this execution to go forward in spite of the horrific final minutes that Irick may well experience, then we have stopped being a civilized nation and accepted barbarism,” she wrote.