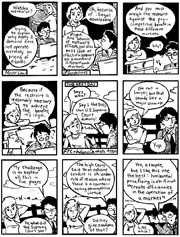 Updated: A lawyer who opposes the Justice Department’s proposed antitrust settlement with three publishers of e-books has filed an amicus brief (PDF) in the form of a comic strip.

Bob Kohn tells Bloomberg and the New York Times Media Decoder blog that he opted for the unusual format after U.S. District Judge Denise Cote of Manhattan limited his brief to five pages. “I thought of the idea of using pictures which, as we know, paint a thousand words,” Kohn told Media Decoder.

He calls the cartoon a “graphic novelette” and says it complies with court rules requiring 12-point or larger type and one-inch margins, Bloomberg says. The illustrator attends school with Kohn’s daughter, Katie, who is pursuing a Ph.D. in film studies at Harvard.

The U.S. Justice Department filed suit in April against Apple and five publishers claiming a conspiracy to address Amazon.com’s low e-book pricing of $9.99 that was often below its cost. The DOJ saw a price-fixing conspiracy, while supporters said Amazon’s low prices were killing off competition and allowing it to gain market share.

Kohn’s brief begins with a traditional table of authorities. The comic strip follows, with the first panel showing Cote ordering a five-page limit. Kohn then tries to compose his brief at home, sitting in bed wearing a robe and working on his laptop. His daughter enters the bedroom and asks Kohn what he is working on. “Trying to explain why supply & demand does not operate normally on pricing of e-books,” Kohn says. At the bottom of the picture is a rectangle with a two-word reference to one of the cases in the table of authorities.

“Oh, because of illegal downloading,” Katie says. “Right,” Kohn replies. He goes with a short explanation of his argument. The comic then shifts to the next day, where Kohn is discussing the case with his daughter on a park bench. Kohn tells Katie his argument is backed by the U.S. Justice Department’s own Supreme Court authority, to which his daughter replies, “I’m not a lawyer, but that sounds like a major screw-up.” Later she concludes, “Wow! The DOJ really blew this one.”

After Katie picks up the argument, Kohn tells her she should have been a lawyer. “Nope, not for me,” she says. “I’m a novelist, and it’s impossible to tell a complex story in only five pages.”

Bloomberg identifies Kohn as an expert in music licensing law and chairman of RoyaltyShare Inc. Publishers Weekly suggests Kohn’s comic strip is intended to reach beyond the courtroom. “His rendering is brilliant—not only is it a not so subtle jab at the court for limiting such a complicated case to five page briefs, as a comic strip, the brief will be widely digestible for the general public who may not have the gumption to plow through a typical legal brief,” the publication says.

Even if Kohn had some success in the court of public opinion, he wasn’t able to persuade Cote. In an opinion dated Wednesday, a day after Kohn submitted his brief, Cote approved the Justice Department’s settlement.

In an email to the ABA Journal, Kohn expressed disappointment. “It appears that the District Court completely deferred to the DOJ, whose analysis of the case was faulty and insufficient,” he said.

Updated on Sept. 6 to report on Cote’s ruling.