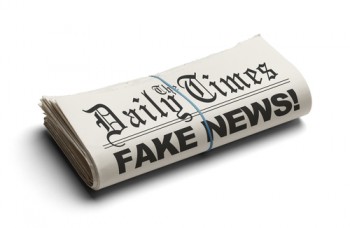 President Donald Trump has claimed that he coined the phrase “fake news,” but the term and the idea it represents are not new, according to an American Bar Foundation research professor.

In fact, the “fake news” charge “has roots in the dark world of American anti-Semitism and in the cries of Lügenpresse (“lying press”) that once echoed in Nazi rallies,” according to the researcher, Victoria Saker Woeste, in a perspective article for the Washington Post.

“Fake news” is a classic trope from an anti-Semitic, fabricated book, The Protocols of the Elders of Zion, which claimed to be the minutes of a meeting in which Jewish elders planned to conquer the world. The book had asserted that Jewish people planned to protect their worldwide government by controlling the press.

The book has been embraced by international anti-Semitic movements and its ideas were incorporated in Nazi laws, according to Woeste. Henry Ford embraced the book’s themes when he started a newspaper called the Dearborn Independent and used it to voice conspiracy theories about Jewish control of American politics and society.

A “relatively obscure” lawyer named Aaron Sapiro, one of many people libeled by Ford, fought back by filing a lawsuit. Ford apologized rather than face a trial.

“Anti-Semites, white nationalists and neo-Nazis have all praised Trump, and his virulent attacks on the media help explain why,” Woeste writes. “His language and tactics echo those used by Ford, one of the foremost U.S. proponents of anti-Semitism.

“When Trump says ‘fake media,’ anti-Semites translate this phrase into ‘Jewish-controlled media,’ a media that exerts disproportionate power over other media outlets and public opinion.”

Next:
After settling equal-pay lawsuit, Sedgwick partner joins another firm