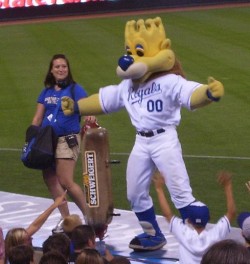 A Kansas City Royals fan who suffered a detached retina after he was hit by a flying hot dog is getting a new chance to take his negligence case to a jury.

Fan John Coomer was hit with a foil-wrapped hot dog flung by the Royals mascot Sluggerrr at a 2009 game, the Kansas City Star reports. Now he “will get another bite at the sausage,” the newspaper says.

The Missouri Court of Appeals found the trial judge had erred when he instructed jurors they could consider whether Coomer had assumed the risk of injury. “The risk of being hit in the face by a hot dog is not a well-known incidental risk of attending a baseball game,” the court said in its opinion.

The mascot launch was a part of the games since 2000. In between innings, Sluggerrr sent hot dogs flying into the stands, either bubble-wrapped and launched from an air gun, or foil wrapped and thrown. Coomer was injured by a tossed sandwich.