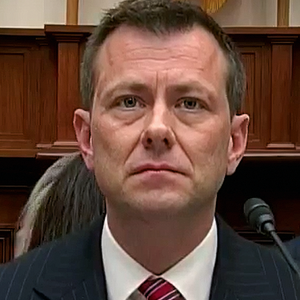 FBI Deputy Director David Bowdich ordered Strzok’s dismissal on Friday, according to Strzok’s lawyer, Aitan Goelman. The Washington Post, Politico and the New York Times are among the publications with stories.

Strzok had denied in a congressional hearing last month that his private views influenced his work in probes of Russian influence in the 2016 presidential election and Hillary Clinton’s use of a private server for email while secretary of state. “I truly believe that today’s hearing is just another victory notch in (Russian President Vladimir) Putin’s belt and another milestone in our enemies’ campaign to tear America apart,” Strzok had said.

Most controversial was this email exchange between Strzok and then-FBI lawyer Lisa Page:

Page: Trump is “not ever going to become president, right? Right?!”

A report by Justice Department Inspector General Michael Horowitz had revealed the exchange. The report said Strzok had prioritized the Russia investigation over the investigation of newly discovered Hillary Clinton emails, and the decision may not have been free from bias.

Strzok had also sent a draft search warrant and affidavit to his personal email account, the report said.

Goelman said the FBI had promised that the normal disciplinary process would be used to handle Strzok’s case, but his firing by Bowdich contravenes an internal recommendation by the bureau’s Office of Professional Responsibility. The office had recommended that Strzok receive a demotion and 60-day suspension.

Strozk’s firing follows the those of FBI Director James Comey and Deputy Director Andrew McCabe, who was accused of lacking candor when speaking to investigators about a media leak.

Trump criticized the group in a tweet on Saturday. “So many of the great men and women of the FBI have been hurt by these clowns and losers!” he wrote.

Trump reacted to news of the firing in tweets on Monday. “Based on the fact that Strzok was in charge of the Witch Hunt, will it be dropped?” he asked.

Trump also noted by tweet Strzok’s involvement in the investigation of Clinton’s emails. “It was a total fraud on the American public and should be properly redone!” he wrote.

…..Will the FBI ever recover it’s once stellar reputation, so badly damaged by Comey, McCabe, Peter S and his lover, the lovely Lisa Page, and other top officials now dismissed or fired? So many of the great men and women of the FBI have been hurt by these clowns and losers!

Agent Peter Strzok was just fired from the FBI - finally. The list of bad players in the FBI & DOJ gets longer & longer. Based on the fact that Strzok was in charge of the Witch Hunt, will it be dropped? It is a total Hoax. No Collusion, No Obstruction - I just fight back!

Just fired Agent Strzok, formerly of the FBI, was in charge of the Crooked Hillary Clinton sham investigation. It was a total fraud on the American public and should be properly redone!