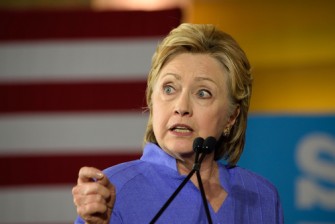 The FBI is recommending that no charges be brought against Hillary Clinton for her use of a private email server while secretary of state.

FBI Director James Comey said on Tuesday that “no reasonable prosecutor” would bring a case against Clinton over the emails, though she and her staff were “extremely careless” in handling the data. The Washington Post, the Chicago Tribune and the New York Times are among the publications covering the development.

The findings now go to the U.S. Justice Department. “We are expressing our view to Justice that no charges are appropriate in this case,” Comey said. His statement is here.

Attorney General Loretta Lynch said Friday that she would accept the FBI recommendations. The FBI interviewed Clinton for about 3½ hours Saturday, her campaign has said.

Lynch’s decision to rely on the FBI recommendation “was surely meant to quiet criticism about the independence of the probe,” according to the Washington Post. She had claimed the investigation was not discussed during a meeting with Bill Clinton at a Phoenix airport last week, “but the conversation sparked an uproar,” the Post said in an earlier story.

Comey said the FBI review found 113 emails containing classified information when they were sent or received from Clinton’s server.

“Although there is evidence of potential violations of the statutes regarding the handling of classified information,” Comey said in the statement, “our judgment is that no reasonable prosecutor would bring such a case.”

In past cases involving the mishandling of classified information, Comey said, prosecutions “involved some combination of: clearly intentional and willful mishandling of classified information; or vast quantities of materials exposed in such a way as to support an inference of intentional misconduct; or indications of disloyalty to the United States; or efforts to obstruct justice. We do not see those things here.”

Comey said it is possible that Clinton’s emails were hacked, but there is no direct evidence it happened. The FBI would be unlikely to see evidence of an intrusion “given the nature of the system and of the actors potentially involved,” Comey said. He added that “hostile actors” did access email accounts of people with whom Clinton was in regular contact from her personal account.

The FBI reviewed 30,000 emails provided to the State Department by Clinton, as well as additional emails that weren’t produced to State. There was no evidence that any emails were intentionally withheld, Comey said. Like many email users, Clinton periodically deleted e-mails or her e-mails were purged from the system when devices were changed.

Among the e-mails that were not produced to the State Department, three were classified at the time they were sent or received, one at the secret level and two at the confidential level.

Comey also said the FBI has “reasonable confidence” there was no intentional misconduct by Clinton’s lawyers in sorting her emails to find those pertaining to work. The lawyers relied on headings and search terms, rather than reading each individual email. The lawyers deleted emails that weren’t returned to the State Department “and the lawyers cleaned their devices in such a way as to preclude complete forensic recovery,” Comey said.