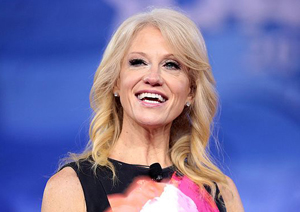 A federal watchdog agency has recommended that presidential adviser Kellyanne Conway be removed from her post for violating the Hatch Act by disparaging Democratic presidential candidates while speaking in her official capacity.

The U.S. Office of Special Counsel said in a letter to President Donald Trump that Conway should be removed because she is a “repeat offender” who has shown a disregard for the law. The agency had found in March 2018 that Conway previously violated the Hatch Act when she opposed the candidacy of Roy Moore’s Senate opponent while appearing on television in an official capacity.

The agency report said Conway continued to violate the law by attacking Democratic presidential candidates in media appearances and on Twitter. In a May 29 interview she scoffed at her responsibilities under the Hatch Act, saying, “Let me know when the jail sentence starts,” the report said.

Special counsel Henry Kerner told the Washington Post that his firing recommendation is “unprecedented” for a political appointee of Conway’s stature. “You know what else is unprecedented?” Kerner said in the Post interview. “Kellyanne Conway’s behavior.”

Other publications with coverage include the New York Times, Politico and the Wall Street Journal. A press release is here.

White House counsel Pat Cipollone criticized the report in a letter to Kerner, calling the recommendation for Conway’s removal “draconian and patently ridiculous.”

Even if the Hatch Act does apply to senior presidential advisers, the Office of Special Counsel failed to give Conway a reasonable opportunity to respond to its allegations, Cipollone’s letter said. The office aimed to “rush the report out the door” because of Conway’s “passing comment” in the May 29 interview, Cipollone wrote.

The Office of Special Counsel is an independent executive branch agency charged with enforcing the Hatch Act, and it is not part of former special counsel Robert Mueller’s office.

The Hatch Act prevents federal executive branch employees from using their official authority to interfere with or influence the outcome of an election. The president and vice president are exempt from the law.

Experts told the Post that the Office of Special Counsel has no authority to discipline Conway because she is a presidential appointee. Nor can it force Trump to fire Conway.