Four current and former Louisville, Kentucky, police officers have been charged with federal crimes in connection with the 2020 police raid that led to the shooting death of Breonna Taylor.

Taylor was a 26-year-old emergency medical technician who was shot and killed by Kentucky police during a botched home raid. She was killed after her boyfriend fired his gun at officers who broke down the door of Taylor’s apartment in the early hours of March 13, 2020. The boyfriend has said he thought that he was firing at intruders. Taylor was killed as officers returned fire.

Police were searching for items belonging to Taylor’s ex-boyfriend, who no longer lived at the address. The raid was based on a falsified affidavit, the charges allege.

Among the publications with coverage of the DOJ’s press conference are the Washington Post, the New York Times and CNN.

“We share but we cannot fully imagine the grief felt by Breonna Taylor’s loved ones and all of those affected by the events of March 13, 2020,” Garland said. “Breonna Taylor should be alive today.”

The charges allege that two officers with the Louisville Metro Police Department prepared and approved a false affidavit used to obtain a warrant to search Taylor’s apartment, that another officer conspired to falsify the search warrant and cover up officers’ actions, and that a fourth officer fired a gun into Taylor’s apartment through a covered window and a covered glass door. 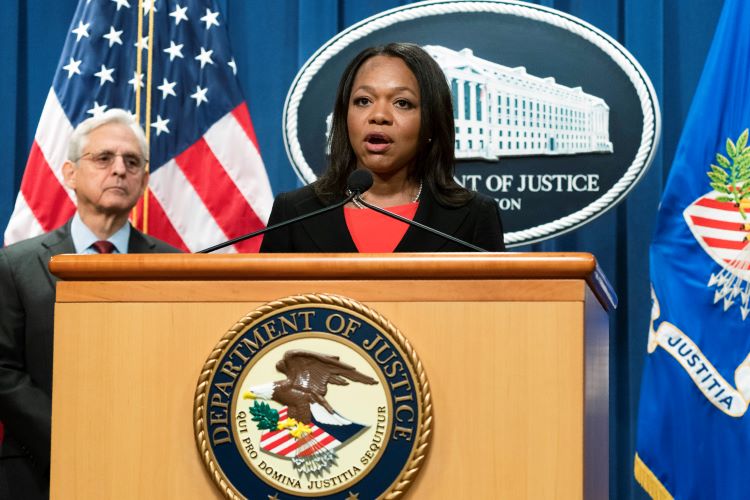 Brett Hankison is the officer accused of firing 10 shots through the covered window and the door, according to an Aug. 3 indictment. He is charged with civil rights violations for allegedly using unconstitutionally excessive force.

Hankison, who was fired, was previously charged with wanton endangerment by the state. He was acquitted on all counts in March, according to WHAS11.

Also facing federal charges are fired detective Joshua Jaynes, who allegedly swore the false affidavit, and current police Sgt. Kyle Meany, who approved the affidavit. According to allegations in the indictment, both men knew that the affidavit was “false, misleading and out of date; that the affidavit omitted material information; and that the officers lacked probable cause for the search.”

The investigative letter falsely asserted that Taylor’s ex-boyfriend had been receiving packages at her home, the indictment alleges.

The fourth officer, Kelly Goodlett, was charged in a federal information for allegedly conspiring with Jaynes to falsify the search warrant and cover up their actions.

ABA Journal: “For some civil rights lawyers, police body camera video can be hard to come by”