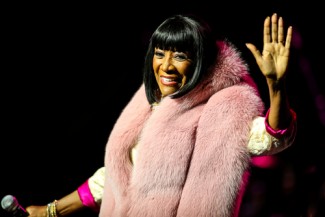 A federal jury on Monday was about to begin hearing a civil case filed against soul singer Patti LaBelle and others over an alleged unprovoked beating of a West Point military academy cadet by her bodyguards. But then the judge overseeing the Houston case called a halt.

Although he wasn’t accusing the lawyers involved of doing anything wrong, U.S. District Judge Keith Ellison said, there were no blacks on the jury. So, after lawyers for both sides agreed, he declared a mistrial and scheduled a second jury selection to begin on Tuesday, according to the Houston Chronicle and KPRC.

The case concerns a 2011 incident at a Houston airport terminal. The alleged victim, Richard C. King, admits he had been drinking. However, King says in court filings, he did nothing to provoke a physical attack by LaBelle’s bodyguards that left him mentally disabled due to a traumatic brain injury, the newspaper reports.

Lawyers for LaBelle contend King made racial slurs and used profanity. A misdemeanor assault charge against one of her bodyguards over the incident resulted in an acquittal in 2013, as the Associated Press and Houston Chronicle reported at the time.

The Associated Press reported in 2011 about an airport surveillance video provided by King’s counsel. It appeared to show King reacting by pushing back only after one of LaBelle’s bodyguards shoved him, the news agency said. Before that, King had been talking on a cellphone waiting for a ride home from the airport.

As the video concludes, two Houston police officers are having their photos taken with LaBelle, the AP notes.

King was initially dismissed from West Point after the airport incident. Although he was subsequently reinstated, he was unable to handle his classes, court filings say, and was given a disability discharge.