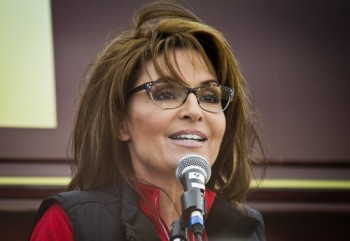 A federal judge in Manhattan has rejected a defamation suit filed against the New York Times by former vice-presidential candidate and Alaska governor Sarah Palin.

U.S. District Judge Jed Rakoff ruled (PDF) on Tuesday that Palin had failed to show that mistakes in the article were made with knowledge of falsity or with reckless disregard of the truth. That standard was required because Palin is a public figure. The New York Times and the Washington Post covered the decision.

“Each and every item of alleged support for plaintiff’s claim of actual malice consists either of gross supposition or of evidence so weak that, even together, these items cannot support the high degree of particularized proof that must be provided,” Rakoff wrote.

Palin had sued over an editorial that falsely stated her political action committee had circulated a map of targeted electoral districts before a 2011 mass shooting that placed 20 Democrats in stylized crosshairs. U.S. Rep. Gabby Giffords, who was wounded in the shooting, was one of the Democrats in the crosshairs, the editorial had said. A federal judge and five others were killed in the shooting.

“The link to political incitement was clear,” the original version of the editorial stated.

The Times later issued a correction saying the crosshairs were placed over targeted electoral districts, not politicians, and there was no established link between political rhetoric and the shooting.

The June 14 editorial was published on the same day that a gunman opened fire at a congressional baseball practice, wounding four before being killed by police. The article said the attack was probably evidence of how vicious American politics has become.

“We come back to the basics.” Rakoff wrote. “What we have here is an editorial, written and rewritten rapidly in order to voice an opinion on an immediate event of importance, in which are included a few factual inaccuracies somewhat pertaining to Mrs. Palin that are very rapidly corrected.

“Negligence this may be; but defamation of a public figure it plainly is not.”