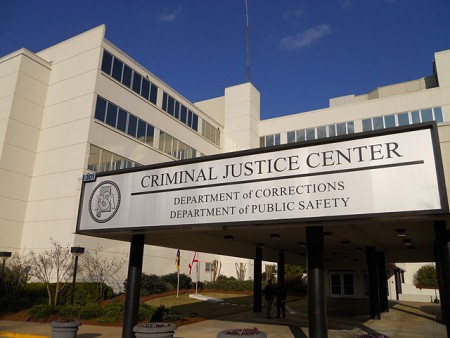 The Alabama Criminal Justice Center houses the headquarters of the Department of Corrections. Photo by Rivers A. Langley, via Wikimedia Commons.

A Montgomery, Alabama, federal court ruled Tuesday that mental health care from that state’s Department of Corrections is so inadequate that it violates the Eighth Amendment.

According to AL.com, the Associated Press and NPR, District Judge Myron Thompson ordered the state Wednesday to quickly come up with a long-term plan to address the complaints of the prisoners in Braggs v. Dunn (PDF).

Thompson’s 302-page ruling said evidence given by both sides, including testimony from the Commissioner of the Alabama Department of Corrections, Jefferson Dunn, supported the plaintiffs’ claim that mental health care in Alabama prisons is constitutionally inadequate.

That harm includes worsening symptoms, self-harm and a “skyrocketing suicide rate” over the past two years, the judge wrote. The suicides included that of named plaintiff Jamie Wallace, who testified at trial that he’d received no treatment other than medications, and got attention from mental health officials only on suicide watch. Wallace committed suicide 10 days after his testimony, in an unmonitored cell. That, Thompson wrote, “draped all the subsequent testimony like a pall.”

Contributing to the problems, the judge said, are overcrowding and understaffing—which Dunn himself testified was a “two-headed monster” the prison system had been wrestling with. As of September 2016, the judge wrote, the state held 23,328 prisoners in facilities designed for only 13,318. That’s an occupancy rate of more than 175 percent, the opinion says—more than the 170 percent rate found in California in 2011, which was also found legally inadequate.

The staffing problems pertain both to corrections staff—who work for the state—and mental health staff, who come from a private, for-profit contractor. The opinion says MHM Correctional Services Inc. provides too little staff to identify every prisoner with mental health needs. Because the prisons don’t have enough cells to isolate prisoners at risk of self-harm, they frequently ignore those risks, the opinion says, or put prisoners in unsafe rooms. There’s no practice that prevents mentally ill prisoners from being put in solitary, the judge wrote, and solitary confinement worsens their problems.

State officials knew all this, the judge said, and displayed “deliberate indifference” to the risk of serious harm by ignoring multiple warnings. This meets the standard for a claim of cruel and unusual punishment under the Eighth Amendment, the opinion says.

To address those issues, the judge ordered state corrections officials to work with attorneys for the plaintiffs, a class of mentally ill state prisoner , who are represented by the Alabama Disabilities Advocacy Program, the Southern Poverty Law Center and the law firms of Baker Donelson and Zarzaur Mujumdar & Debrosse. SPLC senior attorney Maria Morris told the AP that meetings were likely to start this summer.

The AP reported that state senator Cam Ward estimates the price of compliance at $25 million or more per year, largely to hire adequate staff. Alabama Gov. Kay Ivey said her office was still reviewing the decision, but she’d prefer a plan generated by Alabama’s elected officials rather than a court.