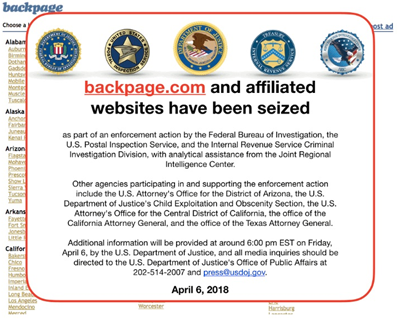 A screenshot taken Monday morning of a Backpage.com home page.

Updated: The federal government has shut down classified advertising website Backpage.com and charged two site co-founders along with five others.

A notice posted to the website on April 6 says Backpage.com and affiliated websites have been seized as part of a law enforcement action, report the New York Times, Wired, the Washington Post, Politico and the Arizona Republic.

A 93-count indictment unsealed Monday includes charges of money laundering and knowingly facilitating prostitution through the website, report the Republic, BuzzFeed News and the Post. Among those charged are Backpage co-founders Michael Lacey and Jim Larkin.

The indictment said Lacey and Larkin retained “significant control” of the website and continued to receive tens of millions of dollars in Backpage-related distributions since “purportedly” selling their interest in the website in 2015.

The Republic reported Friday there was “activity involving FBI agents.” at the Arizona homes of Lacey and Larkin. The newspaper sent an email to a lawyer for Backpage at a backpage.com domain, but it was returned as undeliverable.

In March 2017, Lacey and Larkin filed paperwork to remove their name from deeds to their homes, according to the Republic. A civil suit said a federal grand jury had been hearing evidence about Backpage since February 2017.

Backpage had shut down its adult ads section in January 2017 after a Senate subcommittee report accused the site of editing ads to remove evidence of child sex trafficking. Some courts have ruled that editing content removes the protections of the Communications Decency Act, which protects websites that post user content.

Some of the ads that appeared at Backpage’s adult section began appearing at the singles section of the website, however.

A bill awaiting President Donald Trump’s signature, known by the acronyms FOSTA and SESTA, creates a new federal offense that prohibits the use of websites with the intent to promote or facilitate prostitution. The bill also amends another section of federal anti-trafficking law to ban “knowingly assisting, supporting, or facilitating” sex trafficking. State prosecutions and civil sex-trafficking claims would also be authorized.

The federal government, however, had already used a statute making it a crime to use a facility in interstate commerce to knowingly enable prostitution, according to the Times. The law had been used against websites such as Escorts.com and Rentboy.com.

Update: Another Backpage co-founder who was not named as a defendant in the indictment, CEO Carl Ferrer, pleaded guilty to a federal charge of conspiracy to facilitate prostitution and money laundering, the Justice Department announced Thursday.

Ferrer also pleaded guilty to money laundering in Texas and California state courts, and he agreed to cooperate with prosecutors.