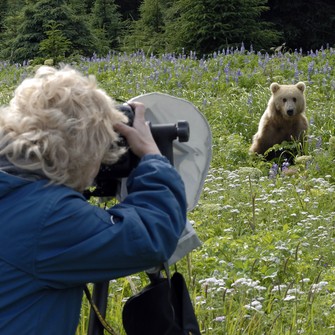 A photographer taking photos of a grizzly bear at Lake Clark National Park in Alaska. Image from Shutterstock.

A furor has ignited over a U.S. Forest Service plan to require members of the media, as well as commercial photographers, to pay up to $1,500 for a permit before taking video or still shots in some 36 million designated federal wilderness acres.

Amidst criticism from both Democratic and Republican lawmakers, as well as advocates for both the media and the wilderness areas the photo restrictions are supposed to protect, the agency has extended the period for public comment on its proposed regulations under the Wilderness Act of 1964 until early December, the Oregonian reports. An earlier Oregonian article provides more details.

“I am very concerned about the implications this has for Americans’ First Amendment freedoms of speech and the press,” said U.S. Rep. Greg Walden, a Republican from Oregon, in a Thursday letter to the head of the Forest Service. “It is also very troubling that journalists could be held to different standards at the discretion of the issuing officer.”

U.S. Rep. Peter DeFazio, an Oregon Democrat, has a similar view and wants the Forest Service to drop the plan.

“What does the Forest Service plan to do next,” he asked, “monitor Instagram accounts and fine users that post pictures of our wilderness areas?

Meanwhile, although there are exceptions for breaking news, media groups say it is an unconstitutional prior restraint for the government to determine whether their activities fall within the parameters of legitimate newsgathering, Fox News reports.

“What if they deny you a permit because they don’t like the story you’re working on?” attorney Mickey H. Osterreicher told the Associated Press. He serves as general counsel for the National Press Photographers Association.

In a written statement provided to the media by a spokesman on Thursday, the Forest Service said the “proposed directive on commercial filming in wilderness has been in place for more than four years and is a good faith effort to ensure the fullest protection of America’s wild places.”

Nonetheless, “To ensure that all members of the public who have an interest in wilderness access have the opportunity to be heard, we are extending the comment period on the proposed directive to Dec. 3, 2014. In the coming weeks the Forest Service will be setting up public meetings to answer questions from the public, including journalists and members of wilderness groups.”

A Federal Register page provides more information about the proposed regulations and how to comment.