First One @ One First: The Line Doesn’t Lie

By 4 p.m. on Heller Eve two years ago, 40 people stood in line along One First Street. At the same time this past Monday, the day before oral arguments in Heller’s sequel, McDonald v. City of Chicago, there were only seven of us.

As the sun set over the Supreme Court, we wondered why the line wasn’t longer; after all, this was the case that would resurrect the privileges or immunities clause of the 14th Amendment and introduce a new constitutional order for all fundamental rights! Nevermind where all the gun nuts were—where were all the abortion warriors, railroad robber barons, education rights revolutionaries, and health care socialists?

But the line doesn’t lie. We were just too wrapped up in McDonald’s hype to listen. This was going to be a simple incorporation case.

For much of the public, Heller took all of the drama out of the Second Amendment debate. The Heller line surely crackled with anxious energy for its full 48 hours: At issue was no less than the definition of the right to keep and bear arms. 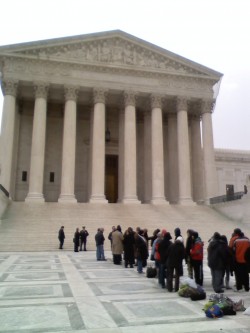 Several months later, when the court vindicated the individual right of self-defense over the collective, militia-based right, incorporation against the states was the natural next step. Both presidential candidates endorsed the ruling, state gun bans were challenged in federal courts, and the country moved on.

But none of this is to say that McDonald’s twenty-four hour line was not extraordinary in its own right.

That this was the first incorporation case in nearly 30 years, coupled with the possible overturning of a 130-year-old precedent, compelled around forty people to spend the night outside in the cold. That’s 37 more history-seeking souls than the sidewalk housed on the night before September’s Citizens United rehearing—also Justice Sotomayor’s debut.

Moreover, I was not the first one in line on Monday morning (JPG). And I arrived 26 hours early. A few quick words with Drs. Rob Cumberland and Larken Euliss—numbers one and two in line, to be precise—provide more proof that the line doesn’t lie. People do not get to the court at 5:30 a.m. on a Monday for a case at 10 a.m. on Tuesday, as Cumberland and Euliss did, if the case does not matter.

“I think the right to keep and bear arms is a fundamental freedom that should be enjoyed by all Americans,” said Cumberland. “Those of us who live in unconstitutionally restrictive states have not been able to enjoy those rights.”

Euliss, however, had her own motivations. “I did not show up 28 hours early to be first or because I was a huge proponent of guns rights,” she said. “I showed up to experience the Monday line, and the surroundings of our great nation’s capital.”

But couldn’t she have gotten in line a bit later, then? “Sure, but if I didn’t show up that early I wouldn’t have seen such a beautiful sunrise over the Capitol, and I will never have that opportunity again.”

That’s some civic virtue coming from a couple of Ph.D. chemists from Malibu.

Monday afternoon marked the arrival of Craig and Lyle Wincentsen, who reunited in front of the court after traveling from Connecticut and Texas, respectively.

Lyle had arrived at 7 p.m. on Heller Eve and missed the general admission cutoff by eight people. This time around, he was determined to get in and see the action.

Craig was thrilled to join his brother in line, in no small part because of his own interest in the Second Amendment and beyond. In between chapters of a Chester A. Arthur biography—Craig is powering through biographies of the American presidents—he looked forward to the dramatic moment of when the gavel strikes and the justices emerge from behind the red curtain.

“Seeing the justices incorporate the Second Amendment just heightens this whole experience for me,” Craig said.

Come midnight, the line featured fifteen high school seniors from Monta Vista High School in Cupertino, Calif.; a handful of law students from Georgetown, George Washington, George Mason, and William and Mary; and at least three paid line-waiters, a phenomenon I had never before witnessed.

By the time the sun came up on Tuesday, people had lined up around the block to form the longest line I’ve seen all year.

As the first 50 of us prepared for the 7 a.m. migration from the First Street sidewalk to the Supreme Court plaza, one of the paid line waiters lamented having to leave the electric scene behind.

“I wish I was going in,” he said, before he packed up and went on his way.

Several hours later, we overnighters spilled back out onto the plaza, realizing that we had drunk the constitutional Kool-Aid. The justices roundly rejected the revival of the PI clause and that brave new constitutional world was not forthcoming.

But after our all-nighter out on the sidewalk, we parted convinced that the line still doesn’t lie: even simple incorporation cases are historic.

Mike Sacks is a third-year law student at Georgetown University interested in legal journalism and the intersection of law and politics. Contact him at .(JavaScript must be enabled to view this email address).