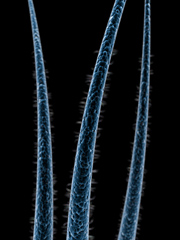 An initial government review of hair analysis testimony by 28 FBI experts has found all but two of them gave flawed testimony favoring the prosecution in most trials where they testified before the year 2000.

The review found the 26 hair examiners overstated forensic hair matches in more than 95 percent of the 268 trials initially reviewed, including 32 death penalty cases, the Washington Post reports. The trials were held over more than a two-decade period before 2000.

Research has not established how often hair from different people may appear the same when subjected to microscopic hair analysis, the story says. Yet FBI experts testified that hairs found at a crime scene were near certain matches to the hair of defendants.

After 2000, hair analysis has been used only to rule out suspects or in conjunction with DNA testing.

The cases are part of an FBI review of about 2,500 cases where its examiners have testified about hair matches. The National Association of Criminal Defense Lawyers and the Innocence Project are assisting in the review. The federal government is offering DNA testing in cases where flawed testimony was used, if it is sought by a judge or prosecutor, and will not raise procedural objections in appeals of those cases.

The Washington Post spoke with University of Virginia law professor Brandon Garrett, who said early court rulings admitting the flawed testimony have made it difficult to challenge hair evidence as unsound. “The tools don’t exist to handle systematic errors in our criminal justice system,” Garrett told the Post.

“The FBI deserves every recognition for doing something really remarkable here. The problem is there may be few judges, prosecutors or defense lawyers who are able or willing to do anything about it,” Garrett said.