Flynn pleads guilty to lying to the FBI in Mueller's Russia probe, says he is cooperating 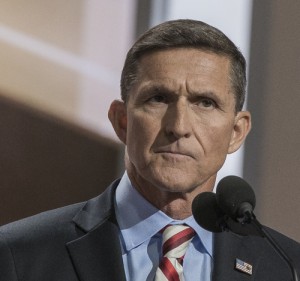 Updated: Former National Security Adviser Michael Flynn has pleaded guilty to making false statements to the FBI and has released a statement saying he is cooperating with special counsel Robert Mueller.

"My guilty plea and agreement to cooperate with the Special Counsel's Office reflect a decision I made in the best interests of my family and of our country. I accept full responsibility for my actions," Flynn said in the statement.

U.S. District Judge Rudolph Contreras said during the plea hearing that Flynn had agreed to provide “substantial assistance for prosecution of another person,” the Los Angeles Times reports. That person was not identified.

President Donald Trump’s lawyer, Ty Cobb, said in a statement that “nothing about the guilty plea or the charge implicates anyone other than Mr. Flynn.” Both statements were published on Twitter by broadcast networks.

Publications covering the plea include the New York Times, CNBC, the Washington Post and Politico.

The criminal information says Flynn “did willfully and knowingly make materially false, fictitious and fraudulent statements” to the FBI in January. Flynn’s false statements were made regarding conversations with then-Russian Ambassador Sergey Kislyak in December 2016, prosecutors said. Kislyak was replaced in August.

According to the Washington Post, court records indicate that Flynn was working with officials of the Trump transition team, “rebutting the idea that he was a rogue operator.”

Court records indicate that a “very senior member of the presidential transition team” directed Flynn to contact foreign officials from Russia and other governments about a United Nations resolution on Israel, the Washington Post reports. Unnamed sources tell the Post that official was Trump’s son-in-law, Jared Kushner.

An unnamed source tells ABC News that Flynn is prepared to testify that Donald Trump directed him to contact the Russians with the idea of working together to fight ISIS in Syria.

According to prosecutors, Flynn falsely stated that he did not ask Russia to “refrain from escalating the situation in response to sanctions.” the document says. The Obama administration had imposed the sanctions in response to allegations that Russia had tried to influence the election.

Flynn also falsely said he did not ask the ambassador to delay a vote on or to defeat a pending United Nations Security Council resolution, according to prosecutors. The resolution concerned whether to condemn Israeli settlements, the Times reported. The Obama administration was prepared to allow a vote, but emails reportedly show Flynn saying he would try to stop the vote, according to unnamed sources who spoke with the Times.

The sources told the Times that witnesses and documents indicate Israeli Prime Minister Benjamin Netanyahu had asked the Trump transition team to lobby other countries to help Israel. Flynn and Kushner reportedly took the lead in those efforts.

A source tells the Post that Flynn’s son, Michael Flynn Jr., is not expected to be charged as a result of Flynn’s negotiations with Mueller’s team. Prior reports indicated that Mueller was investigating Flynn in connection with an alleged plan to use force to transport a Muslim cleric from the United States to Turkey. Investigators were also reportedly examining whether Flynn’s son had any role in the efforts.

Flynn was national security adviser for 24 days before being forced out Feb. 14 for misleading Vice President Mike Pence about his contact with Kislyak. At the time of Flynn’s resignation, he was reportedly under investigation by the Defense Department for payments received from Turkey and Russia.

"Nothing about the guilty plea or the charge implicates anyone other than Mr. Flynn." pic.twitter.com/TEygBKCx0W

Updated at 10:50 a.m. to add statements from Flynn and Ty Cobb. Updated at 2:45 p.m. to include information about Flynn’s work with the transition team.